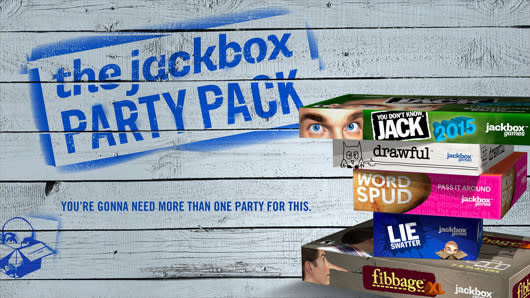 Jackbox Games will launch a digital bundle that includes a new version of You Don't Know Jack alongside four additional party-ready games later today for the PlayStation 4, PS3, and Xbox One.

The package also includes the new games Word Spud, Lie Swatter, and Drawful, all of which are optimized for multiple players and support tablet and smartphone input. A bundled Steam release for all five games is also in the works, though a release date is not yet known.

[Video: Jackbox Games]
In this article: drawful, fibbage, fibbage-xl, jackbox-games, jackbox-party-pack, lie-swatter, microsoft, party, playstation, ps3, ps4, word-spud, xbox-one, you-dont-know-jack-2015
All products recommended by Engadget are selected by our editorial team, independent of our parent company. Some of our stories include affiliate links. If you buy something through one of these links, we may earn an affiliate commission.