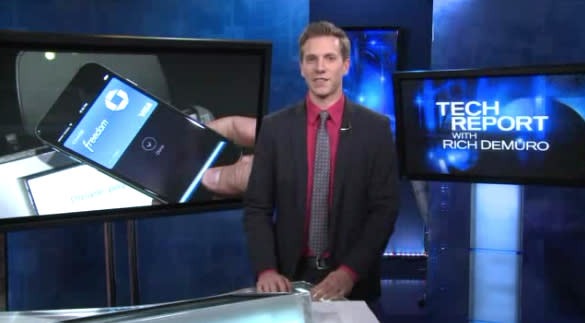 Apple senior vice president of internet software and services Eddy Cue has a lot to be happy about with a successful Apple Pay rollout in the last month. He's so happy that he went out and did a lot of early holiday shopping with KTLA's Rich DeMuro at a number of stores that feature -- surprise! -- Apple Pay as a payment method.

Cue and DeMuro started their day at Panera Bread, where they ordered a quick breakfast using the chain's app and picked it up, all without interacting with one of those pesky human beings. Then it was off to Bloomingdales, where Cue had the opportunity to pay at a terminal using the now-familiar tap with his finger on the Touch ID home button.

At the Disney Store, Cue had to sign for his transaction, explaining that some retailers are still requiring signatures for larger transactions. DeMuro notes that Apple is hoping that eventually retailers will get rid of the need to sign at all. Eventually, the duo showed up at a Santa Monica, CA Apple Store to buy some new iPads ... which of course allow Apple ID purchases from within apps.

All in all, this is a great introduction to Apple Pay if you haven't yet had the opportunity to try it out. The video will start in about 30 seconds after the ad.
In this article: apple pay, bloomingdales, disney store, eddy cue, panera bread
All products recommended by Engadget are selected by our editorial team, independent of our parent company. Some of our stories include affiliate links. If you buy something through one of these links, we may earn an affiliate commission.