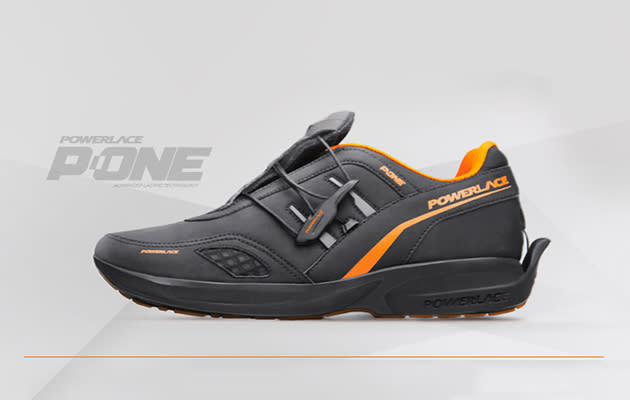 Ever since Marty McFly first wore them in Back to the Future Part II, we've all dreamed of auto-lacing shoes. Nike has now said that a pair will launch in 2015, but despite that, a Canadian startup is taking to Kickstarter to try and beat the shoe giant to the punch with its Powerlace P-One shoes.

Despite their name, Powerlace shoes feature a non-electric system that relies on your body weight to tighten the laces. As soon as you step into the shoes, your heel presses down on a concealed disc that's linked by wires to the laces. There's a lever attached to the back of the shoe that allows you to release pressure to loosen the laces to your taste.

Visually, it's unlikely the P-Ones will win many fans. They look like a typical pair of no-name running shoes, with huge and fairly unattractive "POWERLACE" branding plastered over their sides. The campaign is seeking an astronomically high $650,000 CAD (about $577,000) to make Powerlace a reality, with prices starting from $175 CAD ($155) for early birds and $195 CAD ($173) for everyone else. Should the campaign be successful, the first shoes are expected to ship next May. Given Nike's unspecific "2015" date for its auto-lacing shoes, not even a successful campaign can guarantee that the P-Ones will still be "the world's first" by the the time they ship.

In this article: auto-lacing, back to the future, crowdfunding, kickstarter, nike, p-one, powerlace, self-lacing, shoes, sneakers
All products recommended by Engadget are selected by our editorial team, independent of our parent company. Some of our stories include affiliate links. If you buy something through one of these links, we may earn an affiliate commission.