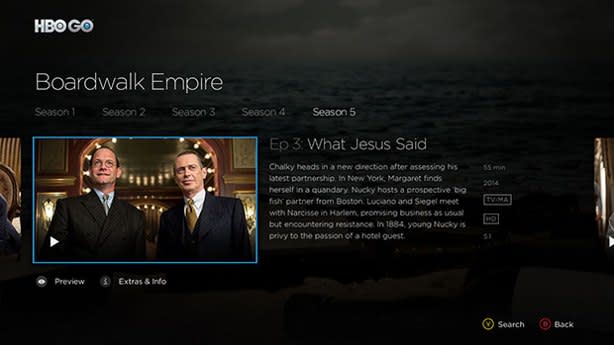 HBO launched its HBO Go app on Xbox One today, finally allowing owners to stream episodes from shows like True Detective and Game of Thrones. The network also offers a number of films, such as its documentary on gaming addiction, Love Child. The app is Kinect compatible, so viewers can navigate the network's streaming selections with their voice or gestures.

HBO's app was one of 35 announced for Microsoft's platform in June that are expected to launch by the end of the year. Of course, HBO Go is available to those with a subscription; stand-alone streaming subscriptions for HBO will first be available in 2015. The app also requires authentication with an eligible TV provider, a list of which can be found on Microsoft's announcement page.
[Image: HBO]
In this article: app, game-of-thrones, hbo, hbo-go, kinect, microsoft, movies, streaming, television, true-detective, tv, xbox, xbox-one
All products recommended by Engadget are selected by our editorial team, independent of our parent company. Some of our stories include affiliate links. If you buy something through one of these links, we may earn an affiliate commission.