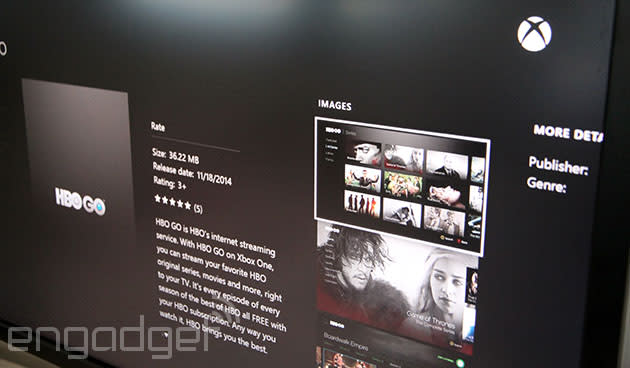 After many, many promises, HBO Go is now available on Xbox One. The app is already available for Xbox 360 and PlayStation 3, but the Xbox One launch marks the first time the premium streaming service is accessible from a current-gen console. The app supports voice and gesture controls through Kinect, Microsoft says. As always, users will need to have a valid HBO subscription through their cable provider to watch shows, though that's likely change with the launch of the network's standalone streaming service next year.

Microsoft officially confirmed the news in a blog post on Xbox Wire, the company's Xbox news site. We found the app in the Xbox digital storefront via search, though you can also navigate to the TV and Videos section to snag it there.

Bizarrely, when asked to activate our cable provider through the app, the only options on HBO's site were Apple TV, Roku, Samsung Smart TVs, PlayStation 3 and Xbox 360. Should you run into this, the Xbox 360 activation code will actually work in place of an Xbox One-specific code. That said, in the time between us writing this post and updating it, HBO has added Xbox One to its list of supported devices. Here's a video of Xbox One's HBO Go app in action, care of Microsoft's Larry "Major Nelson" Hryb:

In this article: hbo go, HBOGo, hdpostcross, microsoft, streaming, video, xbox, xbox one
All products recommended by Engadget are selected by our editorial team, independent of our parent company. Some of our stories include affiliate links. If you buy something through one of these links, we may earn an affiliate commission.