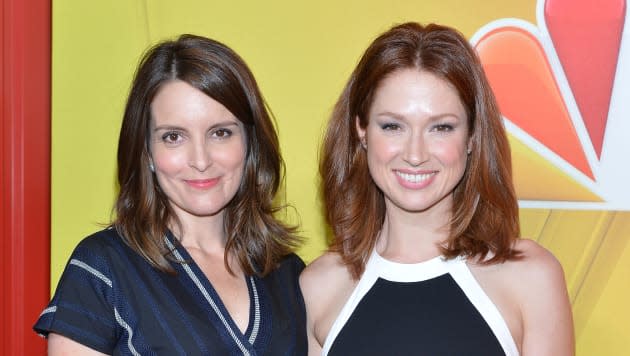 Last year, NBC announced it would be home to a new show written and produced by Tina Fey (30 Rock, SNL) and starring Ellie Kemper (The Office), but now that show's going straight to Netflix. Unbreakable Kimmy Schmidt will premiere across all of Netflix's territories in March with its 13-episode first season, and Netflix has already signed it up for a second. According to NBC exec Rob Greenblatt, the move is a result of the network's "very drama-heavy mid-season schedule", and he calls Netflix's two-season pickup an "instant win-win for everyone." Coincidentally, it comes days after Hulu announced it ordered the series Difficult People, produced by Amy Poehler. The comedy series is about a woman who starts over in New York after leaving the cult where she's lived for the last 15 years, armed with "a backpack, light-up sneakers, and a couple of way-past-due library books." In case 30 Rock fans needed any more reason to tune in, Jane Krakowski and Titus Burgess will be appearing as well. That should help fill the gap until Judd Apatow's Love in 2016, and will arrive around the same time as Netflix's new drama series Bloodline.

In this article: EllieKemper, hdpostcross, nbc, netflix, TinaFey, UnbreakbleKimmySchmidt
All products recommended by Engadget are selected by our editorial team, independent of our parent company. Some of our stories include affiliate links. If you buy something through one of these links, we may earn an affiliate commission.