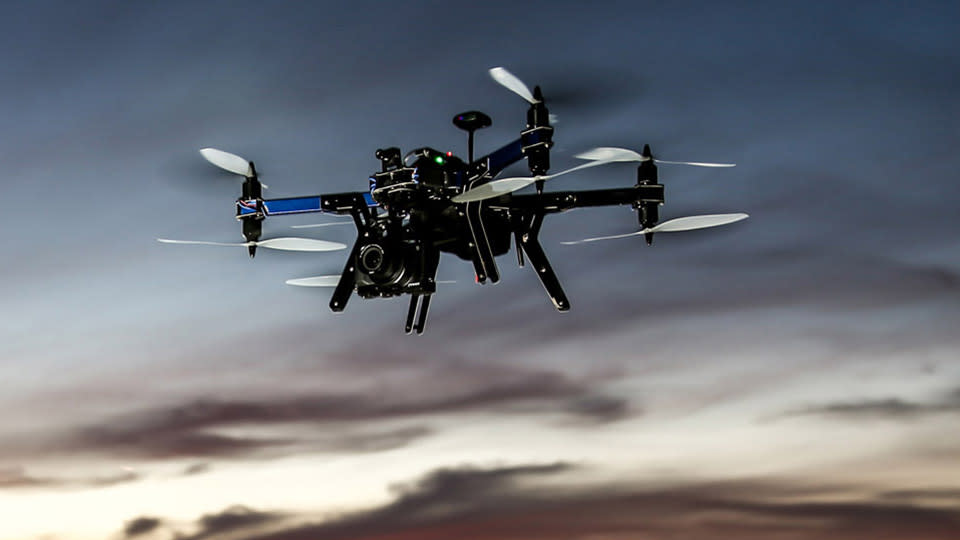 3D Robotics is not about to let DJI hog all the press with its wild Inspire 1 Drone, so it just revealed its own semi-pro model: the X8+. The 8-prop UAV is designed to carry GoPro or lightweight mirrorless cameras, while offering a fully automated flight control system starting at $1,350 (without a gimbal or camera). That price may tempt pro or semi-pro users away from DJI's (admittedly cool), retractable gear model, which runs $2,900 with a built-in gimbal and 4K camera. But unlike DJI's turnkey drone, 3DR is positioning the X8+ as a customizable ship aimed not only at cinematographers, but surveyors or miners too.

The X8+ is an upgrade on the X8 model in nearly every way. It'll carry 800 grams (1.76 pounds) and fly up to 18 minutes, but if you're willing to sacrifice endurance, you can carry up to 2.2 pounds with, say, a mirrorless camera. 3D Robotics says it'll fly Blackmagic Design's Pocket Cinema Camera, for instance, which is rather heavy for its size at 350 grams (0.78 pounds). That means it'll easily work with Sony's mirrorless NEX cameras or compact models like Panasonic's LX100. For an extra $350, you can also kit it with an FPV GoPro liveview kit for easier scouting and aerial photography.

3D Robotics also has some interesting automation options for its latest drone. The X8+ can track you around while keeping you centered in your videos using the 3PV follow me mode, handy for filming your own sporty exploits. It also includes open source mission planning software compatible with most PCs and smartphones. Using the DroidPlanner 2 software, you can simply draw lines on a map with an Android device to fly it around, hands-free. You can even map a region-of-interest (ROI) waypoint, to keep the camera locked on a target throughout the flight.

While the X8+ starts at $1,350, it'll run a lot more to kit it up properly. With a carrying case, gimbal, 3DR FPV liveview for GoPro and a GoPro Hero 3+ camera, you'll be looking at nearly $2,600 -- or around $2,700 for 4K with the Hero 4. That's Inspire 1 territory, so choosing between the two may come down to a simple choice: do you need the DJI's unfettered 360 degree view, or the ability to use better cameras? Decisions, decisions.

In this article: 3D Robotics, cameras, Drone, gear, robots, timeline16droneself, UAV, video, X8+, X8Plus
All products recommended by Engadget are selected by our editorial team, independent of our parent company. Some of our stories include affiliate links. If you buy something through one of these links, we may earn an affiliate commission.