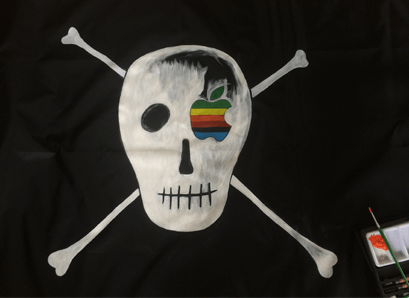 If the interior components of the original Macintosh were the heart of the device, then many of the graphic elements designed by Susan Kare were its soul. Kare designed fonts for the Mac, created many of the icons that graced the Mac for many years, and is even responsible for the Command Key symbol that's still on Apple keyboards. She also painted a skull and crossbones on a black "pirate flag" that flew over the Mac team's original office that embodied a Steve Jobs slogan -- "It's better to be a pirate than join the navy." Kare is now selling custom replicas of the pirate flag, perfect for that someone special on your holiday shopping list.

The original flag is part of the Macintosh legend. The team moved into its own office building on the Cupertino campus, and programmer Steve Capps sewed together a black flag, asking Kare to paint a skull and crossbones on it. The left eye of the skull? The rainbow Apple logo of the time, of course.

Oh, and by the way... if you happen to feel like buying your favorite TUAW blogger this flag for Christmas, I sure wouldn't turn it down.
In this article: artwork, hgg, Mac, macintosh, macintosh 128k, steve jobs, susan kare
All products recommended by Engadget are selected by our editorial team, independent of our parent company. Some of our stories include affiliate links. If you buy something through one of these links, we may earn an affiliate commission.