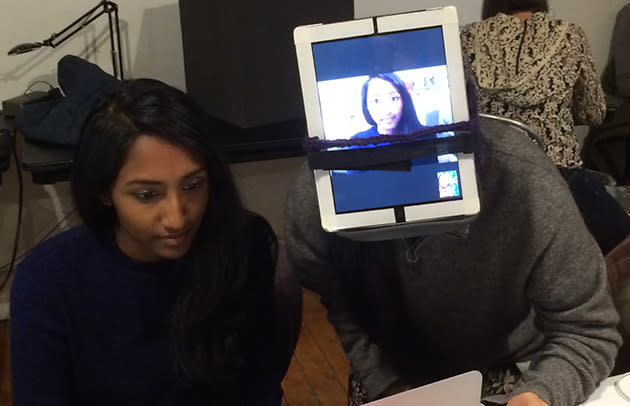 iPad on a face, a Google Glass app that makes the user throw up and a device powered by twerking. These are but some of the masterpieces out of this year's Stupid Hackathon, and they all embody what the event's organizers are looking for: "stupid shit no one needs and terrible ideas." Now before you think we've gone rogue or have had too much wine and stuffing, we promise you that Stupid Hackathon is real, and this is its second run. In fact, we've talked to its masterminds, Amelia Winger-Bearskin and Sam Lavigne, who told us that the event's goal is "to create and fully realize projects that have no value whatsoever." Both founders are students of NYU's Interactive Telecommunications Program, and the first run in spring this year was open only to their schoolmates (who did a great job conjuring up projects "that were both clever satire and just plain weird," Winger-Bearskin said). They've opened it up to everyone this time, because, well, why not -- everybody's got some crazy ideas brewing in their brains. So long as participants actually create something within the hackathon's nine-hour duration instead of bringing pre-made projects, they get to take part in an award ceremony of sorts. There's no money involved, no free gadgets and no glory (depends on who you talk to, we guess), but during the ceremony, successful participants get to hit a "piñata filled with booze, candy, cigarettes and sex toys."

When asked how the event began and why they created it, Lavigne told us:

We get invited to a lot of stupid hackathons (of course, they don't identity themselves as such), and decided we wanted to start our own. The tech industry is full of self-aggrandizement and posturing, and so many hackathons are about solving problems that exist in a social, political or economic sphere -- problems that can't really (and probably shouldn't) be solved within the sphere of technology. Our hackathon, ideally, acts as a critique of the tech industry as a whole, and also a fun space to make things that aren't constrained by solutionism.

We'll stop blabbing right here, because we'll bet you'd rather see what the contenders came up with when they were told the theme for this round was "A Cornucopia of Shit." Click the gallery above, and use the entries to distract your nosy aunt when she asks you for the 30th time why you still don't have kids. (Don't you just love it when the whole family gets together for the holidays?) You're welcome.

PS: We've left out some entries, but you can see the complete list on the event's website. Also, the founders plan to make this an annual event. They've just been invited to do one in Berlin, and Winger-Bearskin, in particular, hopes they can eventually go on a world Stupid tour.

In this article: bitcoin, drone, fonts, gif, GoogleGlass, ipad, OculusRift, stupidhackathon
All products recommended by Engadget are selected by our editorial team, independent of our parent company. Some of our stories include affiliate links. If you buy something through one of these links, we may earn an affiliate commission.