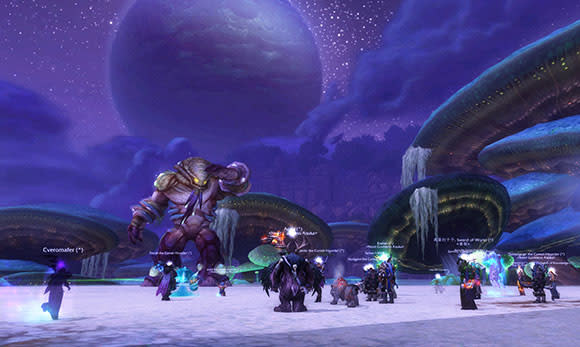 After tomorrow's scheduled maintenance, the normal and heroic versions of Highmaul will be available for raiding on US realms (with EU opening on December 3). The LFR and mythic versions of Highmaul will begin to open the following week. In addition, the first world boss will start spawning in Gorgrond -- either Drov the Ruiner or Tarlna the Ageless, which will alternate every week. Both world bosses drop similar ilvl 650 loot.

Normal and heroic are both flexible between 10-30 players and don't share lockouts. You'll find the entrance to Highmaul in western Nagrand (remember, there's no queuing like there used to be for SoO flexible raids).

Don't forget your bonus rolls! Head over to Fate-Twister Tiklal (Warspear) or Fate-Twister Seress (Stormshield) to purchase your first set of 3 Seals of Tempered Fate. They can be purchased with gold, Apexis Crystals, Garrison Resources, or Honor Points. You can mix and match or buy all 3 with one type of currency, but the more you buy with the same type of currency the more expensive it gets. You can also get one of these free from a level 3 Dwarven Bunker/War Mill in your garrison, or from a rare follower mission. You are limited to 3 per week across all sources.

Check after the break for the full Highmaul raid unlock schedule. Blackrock Foundry is due to open several weeks later.

To help you plan your escapades into the heart of this dangerous new place, we've broken down Highmaul's unlock schedule for you.

source
In this article: Highmaul, Seal-of-tempered-fate, warlords-of-draenor-raiding, warlords-of-draenor-raids
All products recommended by Engadget are selected by our editorial team, independent of our parent company. Some of our stories include affiliate links. If you buy something through one of these links, we may earn an affiliate commission.