Interstellar is still struggling to put private rockets in space 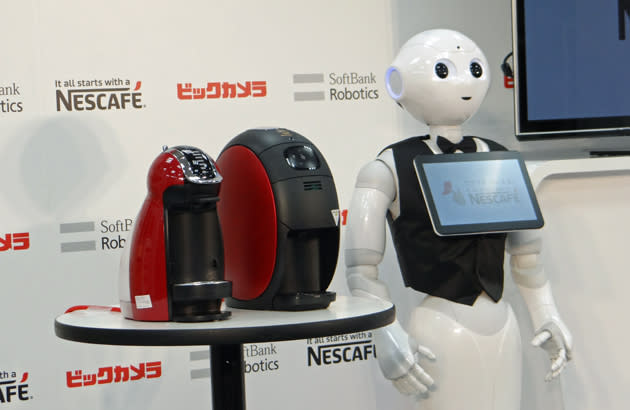 Softbank's Pepper, the robot with a line in cheesy jokes, hand gestures and oddly expressive poses is branching out from offering awkward banter to smartphone shoppers . Now, ahead of going on sale early next year for roughly $2,000, it's looking to help sell coffee machines in department stores like Bic Camera across Japan. A Nescafe spokesperson told CNET Japan that the robot will be able to bore you reel off the special qualities of Nescafe's capsule machines, as well as offer up quizzes and games -- presumably to distract younger, less caffeine-focused shoppers. It's just a shame it's not hooking up with a Poursteady just yet.

In this article: japan, nescafe, pepper, peppertherobot, robot, salesbot, softbank
All products recommended by Engadget are selected by our editorial team, independent of our parent company. Some of our stories include affiliate links. If you buy something through one of these links, we may earn an affiliate commission.