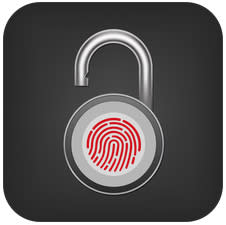 Apple's Touch ID biometric authentication has one very bad side effect on users - when you start using it regularly, you want to unlock everything with your fingerprint. Apple hasn't built a Touch ID pad into Macs yet, but an iOS app called FingerKey (US$1.99) attempts to make up for that oversight.

The app uses Bluetooth 4.0 to communicate authentication info to your favorite Mac wirelessly, and although the app works on any iPhone with Bluetooth 4.0 built in (iPhone 4s and beyond), it of course only allows that fingerprint unlocking with Touch ID-equipped phones.

You'll also need to install an app on the receiving end, AKA your Mac. That free app is called FingerLock, and it's available from the developer's website. It works with Bluetooth 4.0-equipped Macs right now; the developer is working on similar software for Windows and Linux.

Your password is secured by AES 256-bit encryption the entire time it is being stored and exchanged with your computer, so things are relatively secure - much better than writing your password on a Post-it® Note and sticking it to your monitor.

The app is currently a 1.0 release, and there are apparently some issues with the iPhone 6 and 6 Plus that are causing "connection difficulties". Those issues are leaving it with less-than-stellar ratings on the App Store, but then again, even amazingly good apps get crappy ratings sometimes. FingerKey is a cool idea, and it will hopefully keep Mac users happy until Apple releases a Touch ID-equipped Magic Mouse, Magic Trackpad, and all MacBooks come with a little Touch ID ring.

In this article: Bluetooth 4.0, FingerKey, FingerLock, iPhone, Mac, Touch ID
All products recommended by Engadget are selected by our editorial team, independent of our parent company. Some of our stories include affiliate links. If you buy something through one of these links, we may earn an affiliate commission.