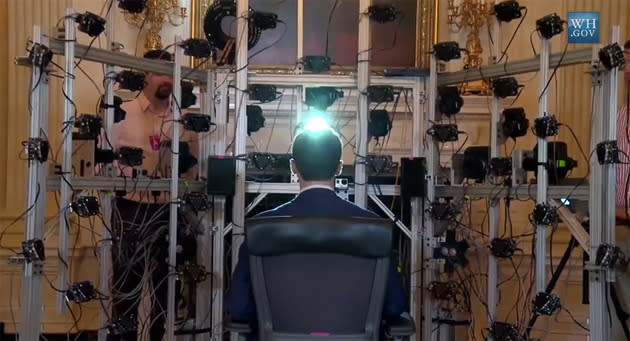 One of the highlights of the White House's first-ever Maker Faire was another first: a 3D-printed portrait that recreated the President's head with uncanny detail. But just how did this eerily realistic image come to be? The White House is more than eager to explain, apparently. As you'll see in the clip below, the bust's creators (Autodesk, 3D Systems, the Smithsonian and the University of Southern California) surrounded President Obama with 50 LED lights, 14 cameras and handheld 3D scanners to capture every nuance of his skin. After that, they used high-resolution 3D printers to recreate the hyper-detailed model. It's not clear if this will become a custom for future US presidents. However, it's easy to see this technology becoming a valuable historical tool -- you could always know exactly what heads of state (and celebrities, for that matter) looked like in their prime.

In this article: 3dprinting, 3dsystems, autodesk, barackobama, bust, portrait, president, presidentobama, scanning, smithsonian, UniversityOfSouthernCalifornia, usc, video, whitehouse
All products recommended by Engadget are selected by our editorial team, independent of our parent company. Some of our stories include affiliate links. If you buy something through one of these links, we may earn an affiliate commission.