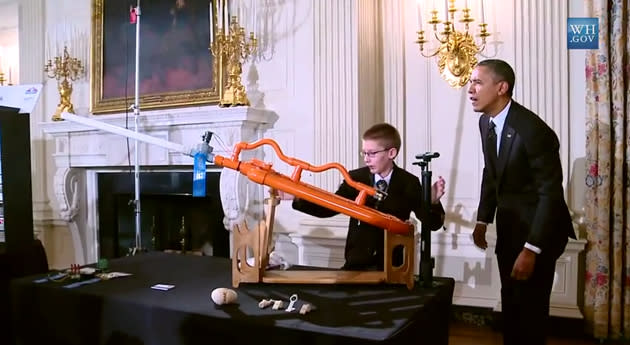 Many will tell you that Maker Faires inspire entrepreneurs, and the White House certainly agrees -- it wants to foster that inventive spirit across the US. Accordingly, it just unveiled plans to host the first-ever White House Maker Faire later in 2014. Details of the competition are coming later, but the government is already encouraging builders to share their creations through both email and Twitter. The upcoming Faire is part of a broader initiative that will encourage support for maker spaces and startups. We wouldn't expect the event to create the next Elon Musk, but it might just give indie gadget designers the exposure (and potentially, funding) they crave.

In this article: entrepreneur, fair, invention, maker, makerfaire, makers, president, video, whitehouse
All products recommended by Engadget are selected by our editorial team, independent of our parent company. Some of our stories include affiliate links. If you buy something through one of these links, we may earn an affiliate commission.