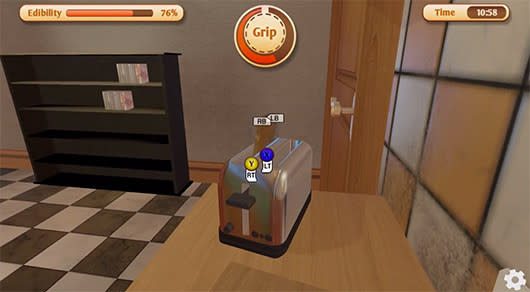 Developer Bossa Studios (of Surgeon Simulator fame) has revealed plans to launch its next stab at turning awkward movement into a game when I Am Bread reaches Steam Early Access on December 3.

While Early Access is just that - it offers a pre-release version of a game to truly dedicated fans willing to overlook the bugs that would be removed for a final, official release - the video below the break demonstrates that I Am Bread should be familiar territory for players of Surgeon Simulator. Here we have a relatively normal situation, in this case a piece of inexplicably ambulatory bread apparently attempting to toast itself, that is rendered both entertaining and tense by intentionally awkward controls and physics that make wrecking the nearby world as fun as making it into the toaster. I Am Bread obviously features less arterial spray than Surgeon Simulator, but you also don't have to worry that launching your slice of sustenance off a table will result in some hapless patient losing a lung.

Bossa Studios has yet to reveal an official launch date for I Am Bread, but the launch price will likely match the $10 price tag attached to the Early Access version of the game.
[Image: Bossa Studios]

Show full PR text
In our continuing efforts to make some dough, we occasionally work on half-baked games that some might say aren't really worth the wheat. Not so in the case of I am Bread, which is, perhaps, the greatest bread-based game ever, coming from the fine folks at Bossa Studios, developers of Surgeon Simulator, Monstermind and more. We have a feeling we're going to loaf working with them.


Bossa Studios is delighted to announce that its latest slice of gaming goodness, I am Bread, will be buttering up Steam Early Access from this Wednesday, December 3, priced £6.99/$9.99.

To celebrate the news, Bossa has also released a brand new trailer, featuring never-before-seen action from our wholegrain hero. Check it out right here

You can also find out more about Bossa's secret recipe by heading to www.iambreadgame.com.
In this article: bossa-studios, i-am-bread, pc, surgeon-simulator, surgeon-simulator-anniversary-edition
All products recommended by Engadget are selected by our editorial team, independent of our parent company. Some of our stories include affiliate links. If you buy something through one of these links, we may earn an affiliate commission.