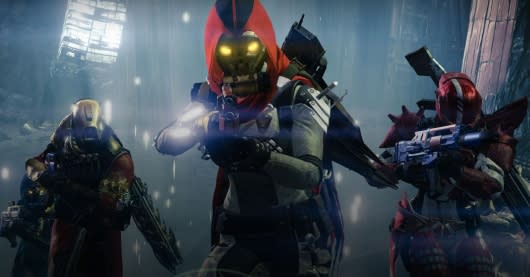 The first expansion to Destiny, The Dark Below, is launching on December 9th. Some players will get new content out of it. That's not editorializing; the official preview of the mechanical changes says outright that the update will bring new content for some and new play mechanics for all. Mechanically, the updates focus around upgrading Exotic equipment, raising character levels to 32, and the addition of Legendary gear that sits below raid equipment and Exotics.

Bungie has also reaffirmed its commitment to not adding in any sort of matchmaking service for the game's raids while praising third-party sites that allow players to find others who wish to take on these raids. This is the equivalent of refusing to own a clock while complimenting your neighbor's sundial. Despite this fact, the developers are aware the demand for this content exists, and the team states it's looking into designing content for this particular audience.

In this article: bungie, console, destiny, expansion, expansions, game-mechanics, large-shoes-like-those-worn-by-a-clown, news, news-items, patch, patches, sci-fi, shooter, the-dark-below, update, updates
All products recommended by Engadget are selected by our editorial team, independent of our parent company. Some of our stories include affiliate links. If you buy something through one of these links, we may earn an affiliate commission.