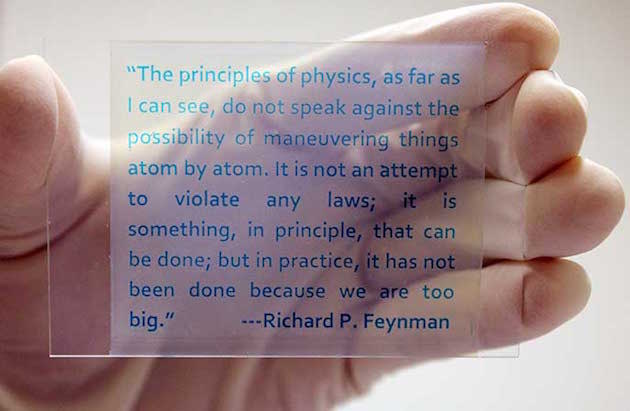 If you ask us, the idea of rewritable paper seems pretty redundant no matter how high-tech it is. Apparently that didn't cross the mind of scientists at the University of California, Riverside. See, that's where Yadong Yin and his colleagues are using special color-switching dyes (called "redox") and an ultra-violet light to put text on a physical medium. In this case, that's a glass or plastic film like the tile above. The school says that these can be rewritten some 20 times without a significant loss in contrast or resolution, and could presumably replace the dead trees we're used to printing documents on. At this point, you're probably wondering how you erase the old text off, and that's fair -- even your favorite rubber pencil-cap won't do a thing here.

Apparently, all wiping the surface clean takes is throwing some heat at it. Yin and crew are working to bring the efficiency up to 100 rewrites, extend the text's lifespan beyond its current three-day mortality as well as developing a paper version. And no, this wasn't funded by Sony: the United States Department of Energy picked up the tab.

In this article: paper, rewritablepaper, Riverside, science, ucriverside, UniversityOfCaliforniaRiverside, yadongyin
All products recommended by Engadget are selected by our editorial team, independent of our parent company. Some of our stories include affiliate links. If you buy something through one of these links, we may earn an affiliate commission.