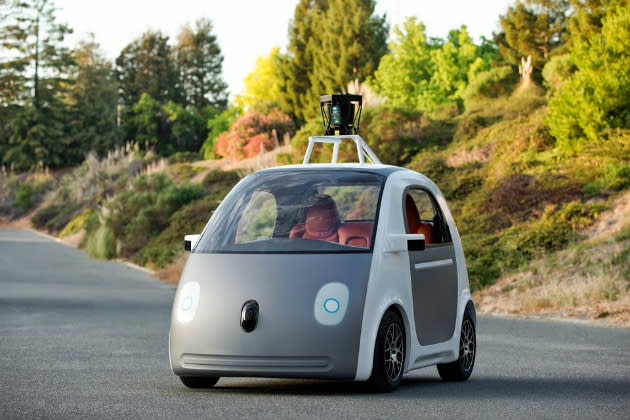 In the not too distant future, we could be clambering into cars that can happily drive themselves to our intended destination. After launching a government-funded competition back in July, the quango Innovate UK (formerly the Technology Strategy Board) has selected four cities to host driverless car trials in Britain next year. The three new projects will cover London, Coventry, Bristol and Milton Keynes, and examine how different self-driving vehicles could be implemented safely and efficiently across the UK.

One project led by the Transport Research Laboratory (TRL) will trial fully autonomous, 10-passenger electric vehicles as a public transport option in Greenwich. They won't be tested on public roads, or at least not straight away; instead, TRL will test them in slower and safer "off-road" locations where it can focus on public reaction. Additional trials will explore autonomous valet parking and tele-operated driving, which would allow engineers to remotely control or support a vehicle that's encountered a problem on the road. Dr Nick Reed, Principal Human Factors Researcher at TRL, tells us a third set of trials yet to be drawn up with Innovate UK could include on-road tests for its driverless electric vehicles.

Meanwhile, a consortium in Coventry and Milton Keynes will test driverless cars on the road with "increasing levels of autonomy," as well as lightweight self-driving pods meant for pedestrianised spaces. The collective includes car manufacturers Jaguar Land Rover, Ford and Tata, engineering and consultancy firm Arup, and educational institutions such as Cambridge and Oxford University. The latter already has experience in this area, having developed an affordable autonomous car system called RobotCar in 2013. Finally, a third group is set to trial driverless cars in Bristol, with a separate focus on the laws and insurance policies that would, no doubt, need to be changed before a full public roll-out. The city's "challenging terrain" will also be used to improve the data around driverless cars, and assess how they could be used to reduce road congestion across the country.

The UK has already shown that it doesn't want to be left behind in the driverless car race; former science minister David Willetts opened talks with the Department for Transport in June to adjust road laws for self-driving cars. Next year's trials should push the agenda one step further, although most of the on-road tests have been described as "demonstrations," meaning they'll likely be small, highly controlled affairs. The projects start from January 1st, but we wouldn't worry about a driverless car pulling up next to you at the traffic lights.

In this article: autonomous, autonomous vehicles, driverless, driverless car
All products recommended by Engadget are selected by our editorial team, independent of our parent company. Some of our stories include affiliate links. If you buy something through one of these links, we may earn an affiliate commission.