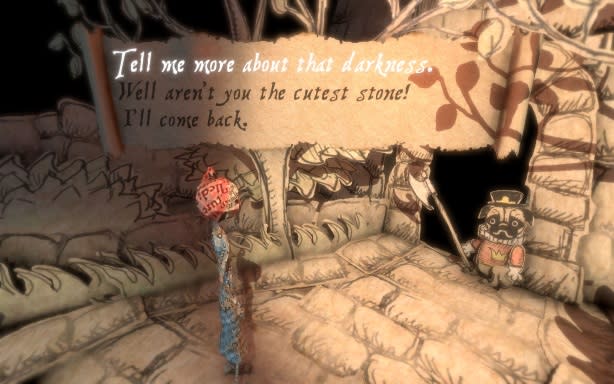 Fable Legends isn't the only game that's been cooking in the labs of Lionhead Studios. A game called Inkquest, which told the story of a girl trapped inside a book, was revealed back in September - though it was only a prototype and not destined to become a full-fledged game. Still, the concept and gameplay were at a point where the project was playable, so Lionhead has released the unfinished build for free to PC users.

"This is the exact build that was featured in the [September] video - we haven't developed it any further," the company posted to their blog this week. "As such, there's bugs and rough edges, and none of the gameplay, visuals or features should be considered 'done.' That's the caveaty bit. Please do let us know what you think all the same – just bear in mind it's little more than a 'sketch,' and should be viewed as such."

Inkquest comes from Lionhead Incubation, a department within Lionhead aimed at giving players a better look at the inner workings and incomplete projects of the studio. "We want the community to share in our failures-that-are-not-failures, and so over time we're going to be sharing some of those ideas with you, hopefully evolving into a regular cycle of interesting things for you to see or play," the company wrote in September.
[Image: Lionhead]
In this article: free, inkquest, lionhead, lionhead-incubation, Lionhead-Studios, pc, prototype
All products recommended by Engadget are selected by our editorial team, independent of our parent company. Some of our stories include affiliate links. If you buy something through one of these links, we may earn an affiliate commission.