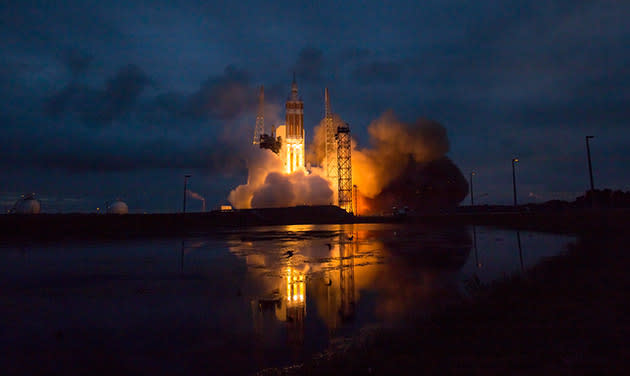 On December 5th, NASA's Orion capsule successfully lifted off from its platform at Cape Canaveral in Florida, reaching a max altitude of 3,600 miles in outer space. During the four-and-a-half hour test flight, it entered the Van Allen radiation belt, orbited the planet, survived its fiery re-entry into our atmosphere and dove into the Pacific Ocean to be retrieved by the Navy. Below, you can see images that represent each stage of the spacecraft's flight, from launch to splashdown. NASA and Lockheed Martin will use whatever data they get from this mission to build a better Orion for the next test flight in 2018. That mission will take off using the Boeing-built Space Launch System, which NASA touts as its biggest and most powerful rocket yet. The new and improved Orion will then spend one whole week in deep space, traveling around the moon and back to Earth, if all goes according to plan. After that, NASA plans to launch its first manned-mission to a near-Earth asteroid sometime in the 2020's, before building yet another Orion with living quarters that can sustain astronauts throughout a six-month journey to Mars.

Watch the rocket take off again:

The US Navy retrieves Orion from the ocean:

NASA reviews what happened during the flight test:

In this article: mars, nasa, orion, space, spacecraft, testflight
All products recommended by Engadget are selected by our editorial team, independent of our parent company. Some of our stories include affiliate links. If you buy something through one of these links, we may earn an affiliate commission.