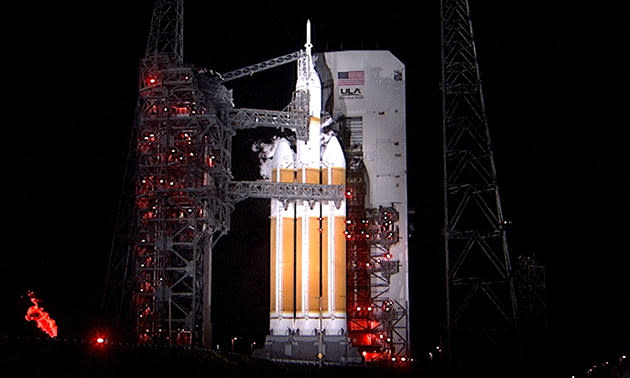 NASA's Orion capsule has blasted off on the farthest journey into space anyone has ever attempted since the last Apollo moon mission. In fact, a Delta IV rocket will propel it to an altitude of 3,600 miles, roughly 14 times that of the International Space Station's -- and for good reason. NASA and Lockheed, which has been building the vessel for years, are betting on it to become the space agency's go-to vehicle for manned, deep-space missions. Thus, the capsule needs to undergo rigorous testing in the right conditions in order to ensure the safety of the astronauts it'll ferry to the moon, and even Mars.

Update: We've embedded NASA's replay video of Orion's successful launch below. The main engines will fire again at around 8:50 AM (EST) to boost Orion to 3,600 miles.

Orion will spend over four hours out there, orbiting Earth once seven minutes into its journey before the rocket's second stage takes it to its highest destination beyond the Van Allen belt. The vehicle's fitted with sensors that can tell the ground crew if the radiation belt can interfere with its onboard controls. After that, the reentry process begins. To pass this "trial by fire," the capsule's heat shields will need to survive hurtling through the Earth's atmosphere at speeds reaching 20,000mph. Its parachute system, which has been tested before, will have to slow it down from breakneck speeds to a full stop within 11 minutes. Finally, if it lands safely (and we, of course, hope it does), the Navy will get to test out a new ocean recovery method.

Orion's success is vital to NASA's plans to send humans to Mars and elsewhere in outer space. After all, ever since the Space Shuttle program was shut down, American astronauts have been hitching a ride on Russian Soyuz rockets for $71 million per person just to get to the ISS. With its own spacecraft capable of carrying people out there, the agency will have full control over its missions and can take home whatever payload it wants. In addition, a successful flight might reenergize the commercial space industry after a couple of recent unfortunate mishaps. If you recall, Orbital Science's Antares rocket exploded just a few seconds after launch, while Virgin Galactic's SpaceShipTwo (which was supposed to take Justin Bieber and Lady Gaga to Low Earth Orbit) disintegrated while 50,000 feet in the air.

Even if the capsule passes today's tests with flying colors, though, it'll take a long time before Orion's ready to take humans where we've never gone before. NASA plans to have it rendezvous with an asteroid and to land it on the moon by the 2020's, years after its next test launch in 2018 aboard the agency's Space Launch System -- the gargantuan and powerful rocket Boeing's currently building. We'll have to wait even longer for the first manned trip to Mars, because the agency believes that won't be possible until the mid-2030's, when a lot of us will already be old and wrinkly.

Update 2: And Orion's back on Earth! NASA tweeted the following this morning:

Splashdown! #Orion completes a critical step on our #JourneytoMars.

In this article: launch, LockheedMartin, mars, nasa, orion, sls, space, SpaceLaunchSystem
All products recommended by Engadget are selected by our editorial team, independent of our parent company. Some of our stories include affiliate links. If you buy something through one of these links, we may earn an affiliate commission.