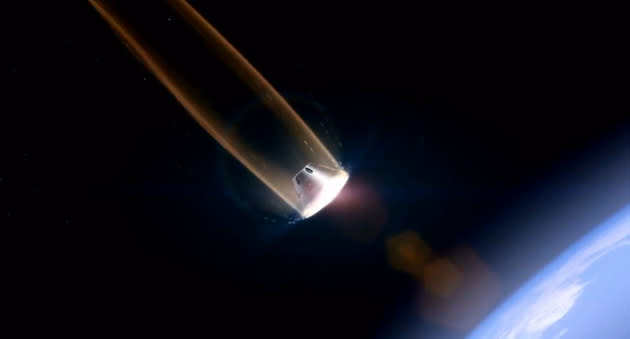 After years of development and launch delays, NASA's Orion spacecraft is almost ready for its first unmanned flight, and the space agency just outlined the capsule's flight path. The unmanned launch will take place in December, and will serve as a test run of the capsule's radiation protection, heat shield and parachute system. NASA will use a Delta IV heavy rocket to launch the craft 100 miles above the Earth's surface where, after completing its first orbit, upper stage rockets will take it 3,600 miles out into space -- just far enough to pass through the Van Allen radiation belt.

We've sent astronauts and countless pieces of hardware through the Van Allen belt before, but it's still a high radiation area that needs to be tested before we start running manned missions. NASA says the capsule has been outfitted with sensors to take new readings on the belt and ensure that it doesn't interfere with any of the capsule's onboard electronics. The Orion will pass through the belt twice and then return to Earth to make a final decent. This will put the craft's heat-shield -- the largest ever built -- to the test and put the already-tested parachute system through its paces once again. Want a break down of the entire flight plan? Check out the video below.

In this article: NASA, orion, space, travel, video
All products recommended by Engadget are selected by our editorial team, independent of our parent company. Some of our stories include affiliate links. If you buy something through one of these links, we may earn an affiliate commission.