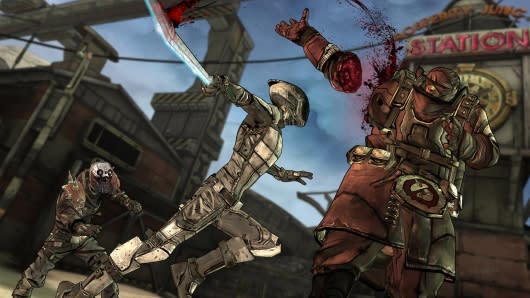 Remember that crazy rumor from last week that Borderlands was going to be an MMO? It was so crazy and unbelievable you just had to laugh. It was also completely true, and it's now confirmed that Borderlands Online will be coming to China, published by Shanda Games and developed by Gearbox. There are no apparent plans to bring the game to the US.

Four classes will be available in Borderlands Online: Warrior, Ranger, Wizard, and Berserker. The game is planned for a release in 2015; a mobile title is also in development, although it's unclear whether it will be a tie-in to the online game or a port of an existing title. So, yes, that crazy rumor was apparently right on the money.
In this article: 2k-games, borderlands, borderlands-online, china, chinese-games, chinese-titles, fps, gearbox, mmofps, new-titles, news, news-items, shanda-games, what-is-this-i-cant-even
All products recommended by Engadget are selected by our editorial team, independent of our parent company. Some of our stories include affiliate links. If you buy something through one of these links, we may earn an affiliate commission.