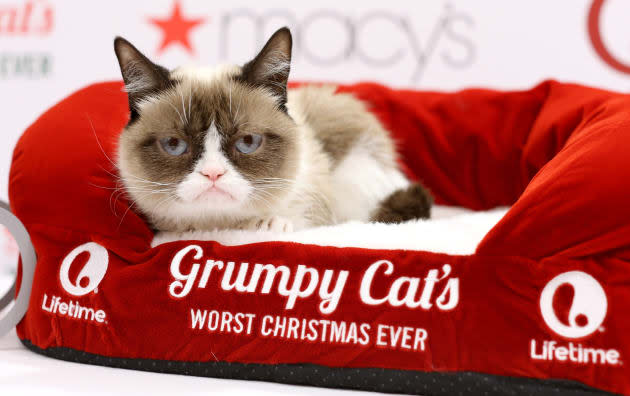 A cat that does nothing but look mildly peeved has managed to parlay that "talent" into nearly $100 million in just over two years, according to the Express. Grumpy Cat's newly-rich owner, Tabatha Bundeson called the feline (whose real name is Tardar Sauce) "unstoppable... what she's achieved in such a short time is unimaginable and absolutely mind-blowing." Feline dwarfism and an underbite caused the cat's permanent glower, which has been plastered over books, merchandise and even a Lifetime film. It even managed to out-earn most Hollywood and sports stars this year -- so if you happen to see four fiery, skull-headed horsemen around, now you know why.

Update: Grumpy Cat's owner, Tabatha Bundesen, has come out and said that the report from the Express is inaccurate. That being said, she didn't specify how much money her perpetually pissed pussy cat has raked in. While it might not be quite $100 million in profit, rest assured that Bundsen has gotten plenty rich off her feline's likeness. In addition to the upcoming Lifetime film, Grumpy cat has "written" two books and has an endorsement deal with Friskies cat food.

In this article: earnings, Grumpy Cat, grumpycat, meme, movie
All products recommended by Engadget are selected by our editorial team, independent of our parent company. Some of our stories include affiliate links. If you buy something through one of these links, we may earn an affiliate commission.