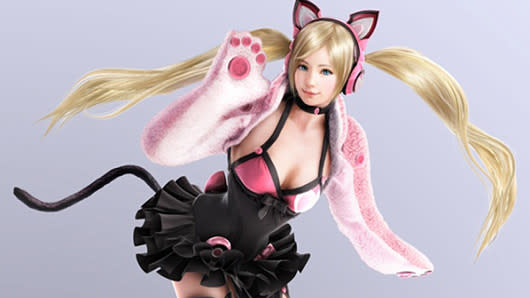 Apparently a human woman dressed in pink cat accessories is too outre for fans of a fighting franchise that stars both a cybernetic Robin Hood and a kangaroo wearing boxing gloves, as the developers behind Tekken 7 have responded to Internet outrage at the game's latest fighter by claiming that she won't appear in American versions of the game.

The character, named "Lucky Chloe," was revealed during a recent livestream celebrating the 20th anniversary of the Tekken franchise. Shortly after, series producer Katsuhiro Harada was alerted to a thread on NeoGAF where a number of commenters slam the character design. "God I hate her already," reads a typical comment.

Frustrated by the backlash, Harada tweeted, "Are you 'Western' only one bulletin board? Hello small world. I'll make muscular & skinhead character for you," in reference to the stereotypical American love for overtly muscular beefcake male characters. He then stated that American fans don't need to be so upset because Chloe is only one of the game's many characters, and she wasn't included to appeal to Western sensibilities anyway. He then noted that Chloe will be "exclusive" to Europe and East Asian territories.

Tweets are not guarantees of future plans, though, especially when made in the heat of the moment.
[Image: Bandai Namco]
In this article: bandai-namco, katsuhiro-harada, lucky-chloe, microsoft, playstation, ps4, tekken, tekken-7, xbox-one
All products recommended by Engadget are selected by our editorial team, independent of our parent company. Some of our stories include affiliate links. If you buy something through one of these links, we may earn an affiliate commission.