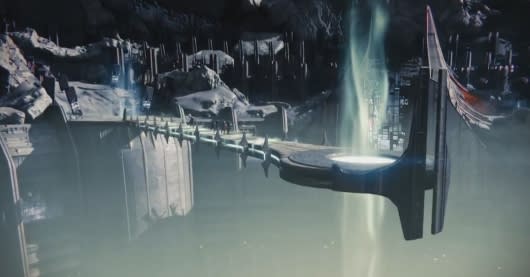 Destiny isn't leaving players in the dark today; the game is actively sending players into the dark. Why? Because The Dark Below launches today, bringing along with it updates and expansions for several parts of the game along with some exclusive content for players who buy early and/or play on a PlayStation system.

The new content includes a new raid, three new competitive arena maps, new loot, new story missions, and another cooperative Strike. Players who purchase before January 15th, 2015, will also receive an exclusive vehicle, and PlayStation players get a special shotgun and access to an additional Strike exclusive to the platform. So if you're ready to start shooting the Hive in the darkest places you can think of, jump in today; we've placed the trailer just after the break.

[Update: Aaaaaaand the new raid has already been beaten.]

In this article: bungie, console, destiny, dlc, downloadable-content, expansion, mini-expansion, news, news-items, patch, patches, sci-fi, shooter, the-dark-below, trailer, trailers, update, updates, video, videos
All products recommended by Engadget are selected by our editorial team, independent of our parent company. Some of our stories include affiliate links. If you buy something through one of these links, we may earn an affiliate commission.