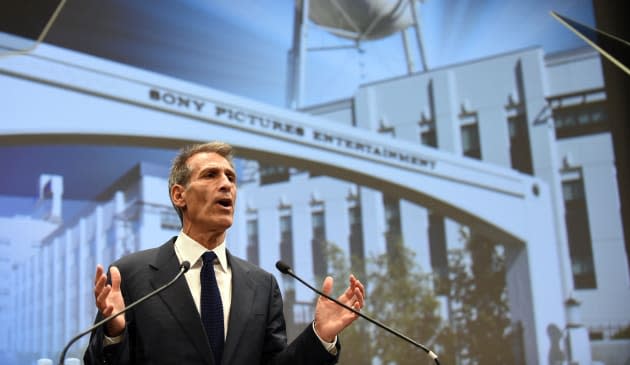 Sony Pictures is in full-blown damage-control mode and has called an all-hands meeting following another huge leak of sensitive, confidential info. The new trove of data released by the so-called GOP (Guardians of Peace) includes more private employee info, actor phone numbers and traveling aliases, legal claims against Sony Pictures, film budgets, scripts and more. As pointed out by the WSJ, it also includes private info of some 40,000 Sony Pictures ex-employees like home addresses, previous salaries and social security numbers. Many of those folks are incensed with the Culver City-based company, which gave them no guidance on how to protect their identities or sign up for credit monitoring.

Suffice to say, much of the information could be highly damaging to Sony's reputation and bottom line. As pointed out by Fusion, the hackers have thrown many of its business practices into the open, which may make future negotiations with high profile actors, technicians and vendors difficult. Sony Pictures CEO Michael Lynton sent a memo to all employees saying that it had "recognized experts working on this matter" and that the FBI had taken control of the investigation. He also said that employees could meet one-on-one with their managers and called an all-hands meeting for this Friday.

Much of the information could be highly damaging to Sony's reputation and bottom line.

Yesterday, Sony released info from the security firm Mandiant, which said the "unprecedented" attack would've been difficult to prevent. But many employees expressed disbelief that sensitive info like social securities numbers and salaries would be kept in unprotected folders by a security-conscious company. Some experts also doubt Sony's claims that the attack was that sophisticated, saying that it should've noticed suspicious activity, even if the virus was "undetectable." One researcher told Mashable that "to protect their image, they need this to be an unpreventable, incredibly sophisticated attack."

Meanwhile, the group allegedly responsible for the hack released another statement along with the leak. The GOP demanded that Sony "stop immediately showing the movie of terrorism" in reference to "The Interview," the upcoming Sony Pictures flick that mocks the North Korean government. That marks the first time the hackers have directly referenced the film, which was denounced by the rogue nation. However, another recently discovered email, sent several days ago, demanded monetary compensation instead. All that, along with another email that contained Korean grammatical errors, means investigators still have no idea if the attack came from North Korea or not.

In this article: Celebrities, Hack, hdpostcross, Leak, Sensitive, SonyPictures, SonyPicturesEntertainment
All products recommended by Engadget are selected by our editorial team, independent of our parent company. Some of our stories include affiliate links. If you buy something through one of these links, we may earn an affiliate commission.