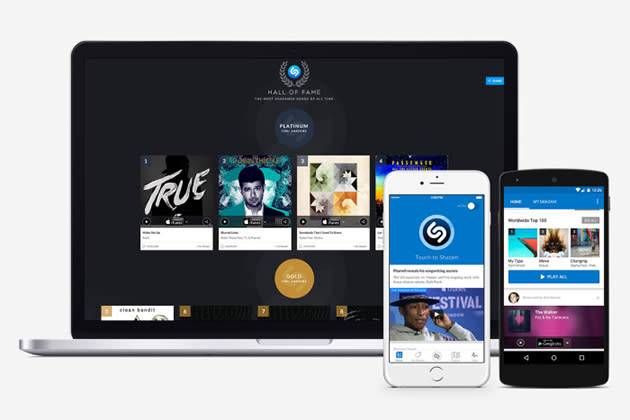 Despite other methods for handling those music discovery needs, Shazam remains the go-to for many to figure out what tune is playing nearby. The company has been keen on adding new features as of late to keep pace and today it tacks on a few more. Users can already play full-length tracks from Rdio without leaving the app, and folks who prefer Spotify can now do the same. You can also have all of the songs you Shazam added to a playlist to revisit later. The expanded Spotify integration is iOS only for now, but Android support is on the way. Those two streaming services also power an in-app music player (if you have a subscription, of course) for listening to what's trending, top charts, recommendations and more. There's also a wealth of new content streams that house everything from interviews to exclusive sessions and a "Hall of Fame" for artists/songs that are particularly popular with the app. Counts have also been added in, so you'll be able to see how many times a particular tune has been spun. In case you're wondering, Avicii and Aloe Blacc's "Wake Me Up" is the most Shazamed song to date, tallying over 19 million searches.

In this article: app, music, musicdiscovery, shazam, software, update
All products recommended by Engadget are selected by our editorial team, independent of our parent company. Some of our stories include affiliate links. If you buy something through one of these links, we may earn an affiliate commission.