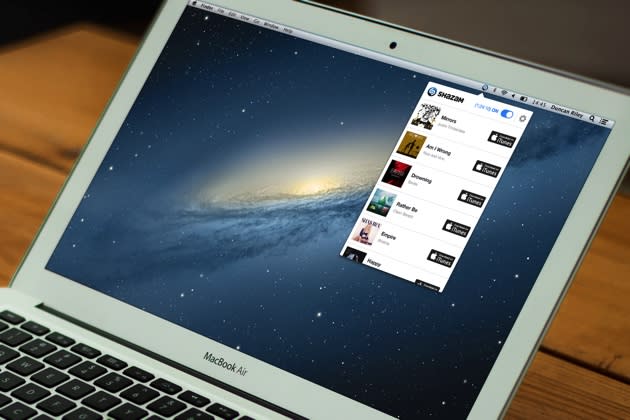 Shazam has already covered ground on mobile platforms such as iOS, Android and Windows Phone 8, but now it is prepared to bring its media identification software to more devices. And it all starts with Apple's line of personal computers. The newly minted Shazam for Mac, naturally, features the same discovery tools which have made the app as popular as it is today, with the main differentiator being that it's new for desktops and laptops. Once installed, the application performs in a rather subtle way, running its trademark ID work constantly in the background, if you allow it to. On the home screen, additionally, it only takes a spot on the menu bar to let you glance at recently discovered media. We say "media" because Shazam isn't just capable of recognizing music playing around you, but also other stuff like TV shows -- this is something that's also possible on the smartphone/tablet apps. When Shazam is activated on your Mac and recognizes, say, a track, it'll let you know via an OS X notification pop-up, after which you can choose to ignore or click it for additional details, including quick access to lyrics, videos and links to the iTunes store. But why would someone want to use this over the smartphone equivalent? Daniel Danker, Shazam's chief product officer, thinks it perfect for users who may be on their laptop listening to Spotify, or on the couch watching something on TV. Ultimately, Danker says the goal is to "give people a magical, effortless connection to the world around them."

"We want to continue making our music and media discovery experience seamless by reaching fans on the platforms they already know and love, so launching on Mac was a natural next step," he told us. And of course in the fall we'll take yet another step down this magical path when Shazam becomes a part of Siri with Apple's iOS 8 launch -- making it even easier for people to explore music, quite literally with the touch of a single button." It's available now from the Mac App Store.

In this article: Apple, hands-on, Mac, Mac App Store, MacAppStore, Music, Music Discovery, MusicDiscovery, Shazam
All products recommended by Engadget are selected by our editorial team, independent of our parent company. Some of our stories include affiliate links. If you buy something through one of these links, we may earn an affiliate commission.