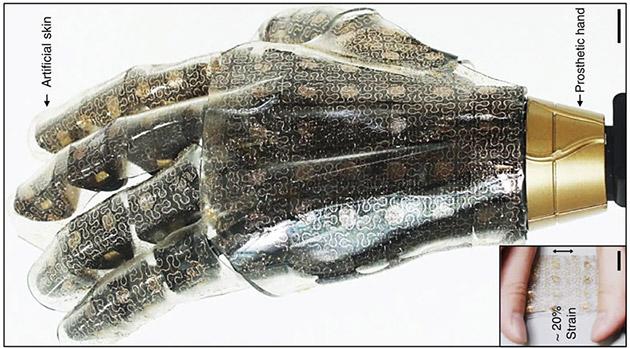 Some prosthetic limbs are so advanced they can be controlled by the brain, but no bionic arm or leg will ever be truly be life-like until they have "skin" that can feel. This new artificial skin developed by a team of American and Korean researchers, for instance, has a dense network of sensors made of silicon and gold that mimic the sensitivity of real skin. The amount of sensors present is important, because as Roozbeh Ghaffari (one of the researchers, who also works for MC10, the same startup behind those Biostamp stickers) said: "If you have these sensors at high resolution across the finger, you can give the same tactile touch that the normal hand would convey to the brain."

Thus, their creation can detect pressure, heat and cold, and even moisture, as discussed in the team's paper published on Nature Communications on December 9th. Since it's designed especially for bionic hands, the scientists also gave the skin enough elasticity so users can stretch and move their fingers like they're real. But it might take some time before this gives someone their sense of touch back, as scientists will still have to figure out how to best connect the sensors to human nerves. That's the same problem DARPA's RE-NET program is attempting to solve in an effort to make prosthetics that can integrate more seamlessly with the human body.

While the team claims that this particular material is one of the most sensitive smart skins created, it's definitely not the first. The Technion-Israel Institute of Technology designed one using gold nanoparticles last year, while scientists from Georgia Tech are developing their own technology that uses piezotronic transistors.