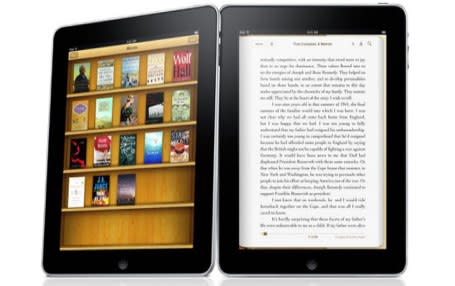 Apple's effort to appeal the adverse judgement handed down by Judge Denise Cote began yesterday before a three-judge panel. As a quick recap, Cote, back in July of 2013, ruled that Apple illegally colluded with book publishers to artificially inflate the price of e-books across the industry. From the get go, some believed that Cote exhibited an obvious anti-Apple bias. Others, meanwhile, found it odd that the U.S. Government was going after Apple so tenaciously in the first place given Amazon's ongoing dominance in the e-book market.

With the appeals case now underway, AFP reports that one judge in particular -- Judge Dennis Jacobs --- is already casting doubt on wisdom behind Cote's ruling.

"What we're talking about is a new entrant who is breaking the hold of a market by a monopolist who is maintaining its hold by what is arguably predatory pricing," Jacobs said.

Jacobs also took a swipe at the government's characterization of the conspiracy among the publishers, suggesting that prosecutors should have shown more leniency in light of Amazon's dominance, which has pushed conventional booksellers like Barnes & Noble close to bankruptcy.

"All those people who got together, it's like the mice saying they want to put a bell on the cat," the judge said.

If the appeals court overturns Cote's ruling, Apple will be off the hook. If they uphold it, Apple will have to fork over $450 million to affected users.

Earlier this month, Apple executive Eddy Cue told Fortune that Apple chose to fight the DOJ instead of settling because "we feel we have to fight the truth."

Is it a fact that certain book prices went up? Yes. If you want to convict us on that, then we're guilty. I knew some prices were going to go up, but hell, the whole world knew it, because that's what the publishers were saying: 'We want to get retailers to raise prices, and if we're not able to, we're not going to make the books available digitally.' At the same time, other prices went down too, because now there was competition in the market.