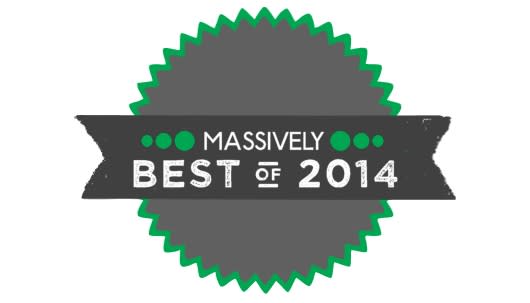 Massively's end-of-the-year awards continue today with our award for the Most Likely to Flop in the coming years. This'd be a released or announced MMO that we think has little chance of performing to expectations, even if it may not capsize completely (though we're happy to be proven wrong!). All of our writers were invited to cast a vote, but not all of them chose to do so for this category. Don't forget to cast your own vote in the just-for-fun reader poll at the very end.

The Massively staff pick for Most Likely to Flop in 2015 and Beyond... @ceruleangrey: I try to refrain from predicting flops because I don't want to see any more. The industry has seen enough recent games perform underwhelmingly, struggle to stay afloat, or sunset that I could probably take wide aim with a dart and be moderately accurate. I hereby declare 2015 a no-flop zone. Nothing but good, healthy, successful games for the next year. It's a law now.

@nyphur: Though I'm still not really sure whether to call it an MMO at this point, I predict that Star Citizen will crash and burn horribly in the coming years. The insane amount of money that players have invested in the game means that no matter how good it is, it'll never be worth the price tag of $66,000,000 and growing. There are people spending more cash each month on virtual space ships than I pay in rent, and at some point they're going to realise it was a waste. If Star Citizen releases without a hitch, becomes the biggest online game in the world and everyone is happy with their pledges, I'll eat my hat. I don't own a hat. I'll eat somebody's hat.

@nbrianna/blog: This is a hard category for the first year ever for me because we have so few serious contenders on the near horizon, and it seems just mean to pick on the itty bitty games that barely had a chance from the get-go (Pantheon, etc.). I don't think any of the AAA MMOs on the horizon are going to outright flop, but I do think several of 2014's MMOs are on shaky ground and will be headed down the inevitable F2P road this year.

@Eliot_Lefebvre/blog: Star Citizen. Yes, I said it. At the price tag this game has racked up, both as a whole and from individual players willing to drop $350 on a ship, there's a whole lot of anticipation built up for what the title will finally be once it launches. Whether or not it's good or bad whenever that finally happens isn't really the point, although I suspect it's going to be average leaning toward good; the problem is that it has so many things tied up in its development that there's no way whatsoever that it can successfully meet all of the player expectations. Right now, it's more idea than actual game. Once reality hits, I think a lot of people are going to be disappointed.

@jefreahard: I've got no guess here. Predicting a flop, assuming flop means shutdown, is next to impossible given the way MMO companies spread misinformation and sit on their player numbers.

@Sypster/blog: Pathfinder Online. Can someone convince me that the devs aren't doing a Three Stooges/Mr. Magoo routine here with the development? PO is so little like Pathfinder that it doesn't deserve the moniker, and the early enrollment date that the team widely promoted had to get delayed so many times that it became a running joke around here. Add on a terribad monetization plan (houses cost WHAT now?) and I have so little hope for this that even a desert farmboy staring into two suns couldn't save this title.

@MikedotFoster/blog: Star Citizen. I'm sure it will be good. In fact, it's probably going to be excellent. But I can't imagine anything short of an actual spaceship satisfying the baying wolves of Star Citizen's $70 million fanbase. Feel free to use this answer again next December when Star Citizen is still three years from launch.

@MJ_Guthrie/blog: As much as I love the features in ArcheAge, I worry that because of the mishandling of so much (exploits, hacks, server stability) it will be left by the wayside as soon as other sandbox titles become readily available to the masses. I still hold out some shreds of hope that things can be turned around, but as they are now, AA will not survive suitable sandbox competition.