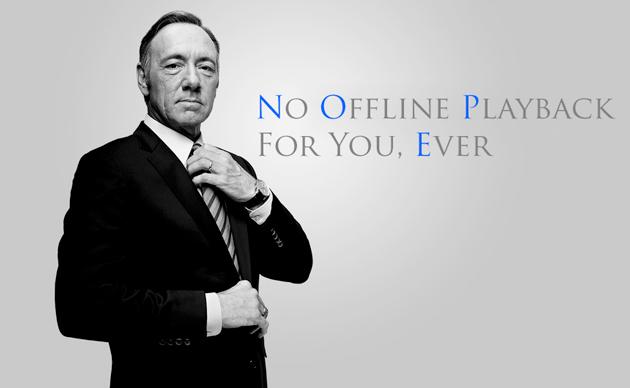 Ever since Netflix mistakenly said that offline viewing would come to Honeycomb tablets, we've waited (and opined) for the moment when it'd happen. Unfortunately, the streaming company is turning a blind eye to our needs as its head of communications saying that cached playback is "never going to happen." In an interview with TechRadar, Cliff Edwards said that the feature is a "short term fix for a bigger problem" -- namely, a lack of high-speed WiFi in certain places. As far as he's concerned, we're not far away from having ubiquitous internet wherever we dare to tread.

Of course, offline viewing would require a lot of negotiations with studios determined to protect what's left of their sales revenue. We wouldn't have been surprised had the company simply refused to discuss the question should things change in the future. Because of Edwards' readiness to shoot down the idea once and for all, it's clear that Netflix is happy to ignore the wide variety of situations where WiFi or cellular connectivity is physically impossible or difficult to procure. Perhaps he won't be so quick to dismiss our desires after he's suffered through a few long-haul flights with a broken at-seat entertainment console.

In this article: Cached, Cliff Edwards, Netflix, Never, Offline, Playback
All products recommended by Engadget are selected by our editorial team, independent of our parent company. Some of our stories include affiliate links. If you buy something through one of these links, we may earn an affiliate commission.