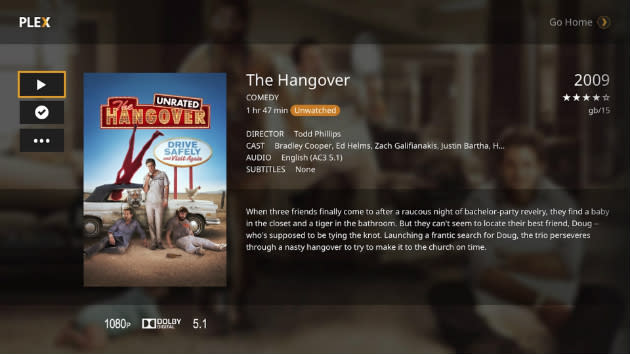 When Plex first arrived on the Xbox One, we figured it would only be a matter of time before the service made its debut on the PlayStation 4. It's taken two months, but finally the company has released an app for Sony's latest console, giving Plex Pass subscribers another way to stream their favorite shows and movies on their TV. It's begun rolling out in Europe and Asia, but we suspect it'll reach the US PlayStation Store soon enough.

Plex, if you're not aware, relies on server software managed from your PC or Mac to organise your personal media collection and make it available for streaming on multiple devices with detailed, visual listings. Today's release adds the PS4 to this growing roster of secondary hardware, which already includes smartphones, tablets and a range of set-top boxes such as Amazon's Fire TV. Consoles are an increasingly popular choice for streamers these days though, so it's no surprise that Plex has made them its next priority. The Xbox One was once positioned as an all-in-one entertainment system, but it's hard for any developer to ignore the PlayStation 4's dominance of the console market right now.

Update: Plex has announced the app for both PS3 and PS4. It's available now across Europe and Asia, with US availability coming "in the near future."

In this article: hdpostcross, movies, photos, PlayStation, Playstation4, Plex, PS4, sony, streaming, StreamingVideo, TV
All products recommended by Engadget are selected by our editorial team, independent of our parent company. Some of our stories include affiliate links. If you buy something through one of these links, we may earn an affiliate commission.