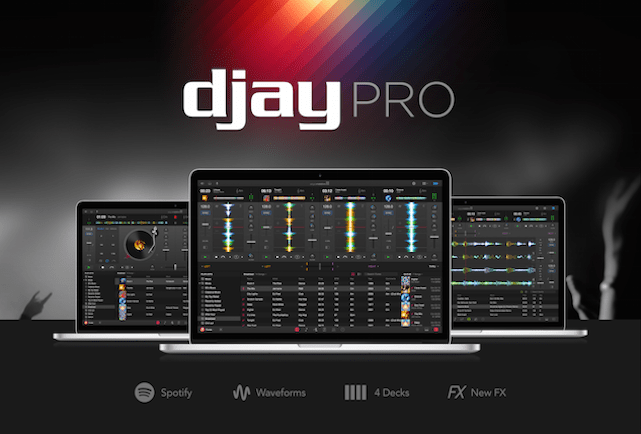 Just in time for non-stop holiday parties, last minute mix-tapes for your friends and family or an always appreciated compilation of road-trip standards, the world's best-selling DJ app just got a whole lot better.

Algoriddim, creators of the Apple Design Award-winning app djay, today released djay Pro. Yes, there is finally a professional version of the ever popular djay app for the desktop. This new desktop version has been totally purpose-built for OS X as djay Pro now can take full advantage of desktop class architecture and 64-bit processing. Earlier this year in May, Algoriddim released djay 2 for the iPhone and iPad adding Spotify integration. Now with djay Pro for the Mac, the desktop jock has access to the same 20 million tracks and growing (minus a few Taylor Swift ditties.) I've been a professional Dee Jay for over 20 years. Gone are the days of stuffing a mini van full of milk crates jam-packed with records, not to mention time-consuming equipment setups. What's worse is to have a party-goer request a random, off-the-wall song backed by a neatly folded Hundy, which you must decline because finding it will be nearly impossible. With djay Pro for the Mac, you can just run a quick search on Spotify and Musica Obscura is a success. "Cha-ching!" I'll be the first to admit when apps in this class first came out I thought they were useless and underpowered. I spouted the typical vinyl curmudgeon mantra, "No self-respecting DJ would ever get caught using a computer, tablet or phone for their set." After falling in love with djay 2 for the iPad I did a complete turnaround on that position. A quick look at the all new user interface and all the professional features one would expect are in djay Pro. Features like beat detection, looping, slipping, scrubbing, multi cue point, non destructive FX, live sampler, beat matching and the killer recommendation engine powered by The Echo Nest that made djay the number one app in its class with over 15 million downloads. What a surprise when I loaded up my library on djay Pro for the Mac, discovering all my metadata like cue point, grid adjustments and FX all carried over from the iOS version of djay via iCloud syncing. The new layout features standard turntable view, and enhanced waveform views that can be adjusted to 2 deck or 4 deck configurations, and even further with horizontal or vertical views of those tracks. It is almost as if Algoriddim set out to create a software version of some of the more elaborate hardware DJ control surfaces on the market. On that note djay Pro supports a wide range of hardware controllers from top makers like Native Instruments, Numark, Vestax, Reloop and Pioneer. If you're a long time DJ professional, enthusiastic hobbyist or just starting out, djay Pro for the Mac is hands down the best application out there for the job. Available in the Mac App Store for any machine running Mac OS X 10.9 or later, djay Pro is available today for limited time introductory price of $US49.99 (regular price will be $79.99.)

In this article: apps, djay, djay pro, music, software
All products recommended by Engadget are selected by our editorial team, independent of our parent company. Some of our stories include affiliate links. If you buy something through one of these links, we may earn an affiliate commission.