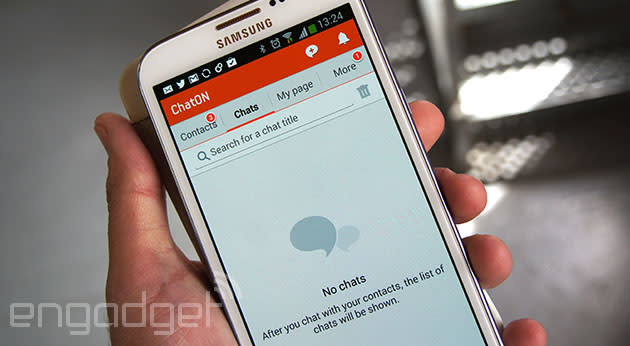 After denying reports that its ChatOn service was close to being disbanded on a region-by-region basis, Samsung has announced in Korea that it's going away. According to Yonhap News, Samsung's statement said it will close up shop on February 1st. It's not immediately clear whether or not that will hold across all regions, but Samsung went on to state that users would be able to back up their data before the shutdown. The company blamed "changing market conditions" for the change, but seems that despite a claimed 100 million strong user base, people weren't really using the software preloaded on so many smartphones.

Update: We contacted Samsung and were told that on February 1st, ChatOn will shut down in all markets except for the US. In the US, it will shut down at some point in Q1, but a date has not yet been announced.

On February 1, 2015, ChatON will be discontinued in all markets except the United States, as we strive to meet evolving consumer needs by focusing on our core services. We remain committed to offering services that cater to our consumers' lifestyles and add value to their everyday lives.

In this article: chat, chaton, instantmessaging, messaging, mobilepostcross, samsung, shutdown
All products recommended by Engadget are selected by our editorial team, independent of our parent company. Some of our stories include affiliate links. If you buy something through one of these links, we may earn an affiliate commission.