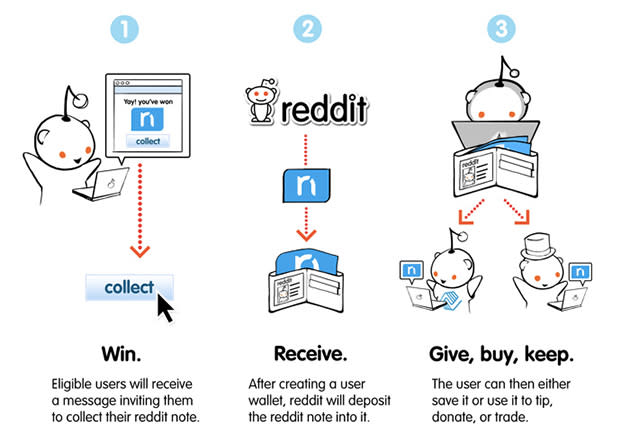 Back when Reddit -- bastion of the internet's weirdest conversations -- raised another $50 million in venture funding, the investors involved agreed to give a combined 10 percent of their shares back to the site's users. For almost three months, none of us knew exactly how that would happen, but now Reddit's talking specifics... sort of. Next year, the company will distribute via lottery some 950,000 Reddit Notes, a kinda-sorta digital currency that'll let users "tip, donate, or trade" with peers who also bacon at midnight.

The key words in that previous sentence are "kinda-sorta." In interview with Inc., Reddit co-founder Alexis Ohanian looks at Reddit Notes as something akin to, but not quite, a currency. Instead, he considers them more of a digital asset -- they've got some sort of intrinsic value "like sugar or gold or bacon" and can be used to fuel transactions between people, but they don't have any actual financial value. That's right: Despite the fact a little back-of-the-napkin math would value each Note at roughly $5.25 ($5 million in shares divided by the tentative number of Notes outstanding), the Notes don't equate to cash in your pocket. They aren't a sign that you own a teensy, tiny fragment of the company, either. They just... are.

Painfully vague? Thankfully, Reddit cryptocurrency engineer Ryan Charles chimed in to say that there's a legal plan in action and that "the cryptocurrency will be exchangeable for something of value." That still doesn't explain too much, but it's all by design. We're still a few seasons away from seeing the first Reddit Notes trickle into the wild, and up until then Reddit's team will likely be grappling with the financial and regulatory ramifications that come with distributing digital assets to redditors across the world.

The idea that Reddit could become a home for these weird little transactions might seem a little off-kilter, but the shift has already started. Did you post a gut-wrenchingly funny comment? Or were you instrumental in helping a stranger track down a long-lost family member? There's a decent chance that someone gifted you a month or Reddit Gold, or tipped you a tiny fraction of a bitcoin as thanks. Like it or not, Reddit isn't just a place to shoot the breeze anymore. It's turning into a peculiar, tiny economy and Reddit Notes will only add fuel to that fire.

In this article: bitcoin, cryptocurrency, currency, reddit, social, startup
All products recommended by Engadget are selected by our editorial team, independent of our parent company. Some of our stories include affiliate links. If you buy something through one of these links, we may earn an affiliate commission.