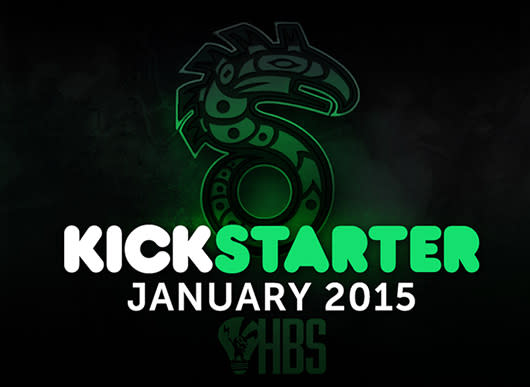 A recent addition to the two-year-old Shadowrun Returns Kickstarter page reveals that developer Harebrained Schemes will return to crowdfunding in January 2015, though the reasons why aren't entirely clear.

The image above is the entirety of the update. That pseudo-shamanic green dragon symbol is the de facto logo for Shadowrun Returns, suggesting that Harebrained Schemes is seeking money to develop additional content for a game we described as a loving, cyberpunk homage to the roleplaying games of the 1990s. Whether this new content might be a second expansion (a la Dragonfall) or even a sequel is unknown.

While Harebrained Schemes' first stab at crowdfunding went very well - the developer was seeking $400,000 and attracted over $1.8 million - that was two years ago. Since that time Kickstarter and sites like it have been flooded by developers seeking money. As we pointed out earlier this year, this glut (not to mention reports of Kickstarter scams) has decreased the amount of money available via crowdfunding. The success of Shadowrun Returns will no doubt bolster Harebrained Schemes' fundraising attempt, but it seems unlikely that the developer will again draw more than four times its goal.
[Image: Kickstarter/Harebrained Schemes]
In this article: CrowdFunding, harebrained-schemes, kickstarter, mac, pc, shadowrun-returns
All products recommended by Engadget are selected by our editorial team, independent of our parent company. Some of our stories include affiliate links. If you buy something through one of these links, we may earn an affiliate commission.