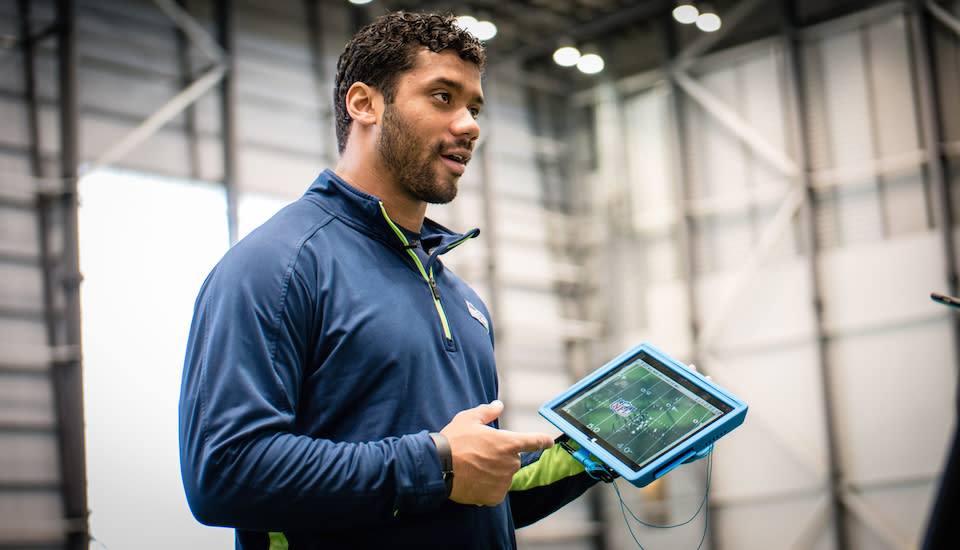 No, those bright blue, ruggedized devices being used on NFL sidelines aren't iPads. They're Surface Pro 2s. And while they may look like Apple's renowned tablet from afar, at least to some NFL commentators, Microsoft's been trying to help players and coaches get more familiar with the Sideline Viewing System since the league implemented it earlier this year. Naturally, this includes Russell Wilson, the starting QB of the Seattle Seahawks. Last week, during his day off, he took the time to talk to us at the Virginia Mason Athletic Center, the team's practice facility -- located in Renton, Washington, around a 30-minute drive from downtown Seattle. 13
Wilson, for the most part, touched on the topic of the Surface Pro 2 in the NFL and its overall functionality, namely how the tablet/laptop hybrid has improved productivity for him as well as the rest of the Seahawks. He also talked about some of his favorite applications (such as OneNote and Skype), what features he'd like to see make their way to the Sideline Viewing System and, wait for it, how he used to be an Apple guy -- Wilson says he doesn't tell too many people that. But regardless of his previous interest in Cupertino products, he's now fully invested in the Microsoft ecosystem. Seriously, he really loves all things Microsoft. Just look at that wrist (hint: It's a fitness tracker). Not that we would expect otherwise, though; he is, after all, the face of some Microsoft ads.

This is the third and final part of our series covering the NFL's use of Microsoft's Surface Pro 2 on the sidelines. For more, you can take a look at the first two segments here and here.

In this article: Football, hands-on, microsoft, NFL, Russell Wilson, RussellWilson, Seattle Seahawks, Sideline Viewing System, Sports, Surface Pro 2
All products recommended by Engadget are selected by our editorial team, independent of our parent company. Some of our stories include affiliate links. If you buy something through one of these links, we may earn an affiliate commission.