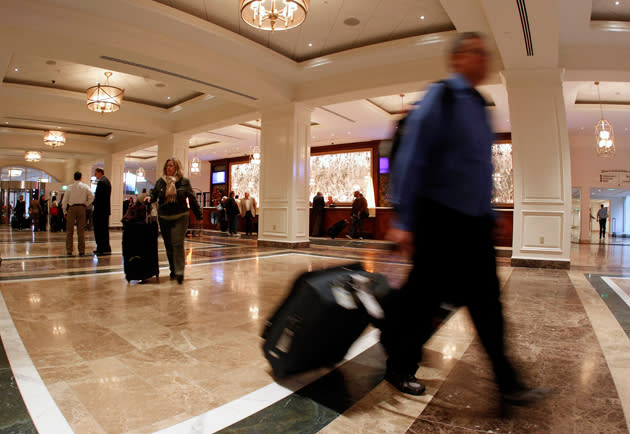 The battle between hotels and hotspot-toting travelers isn't over just because Marriott settled a complaint that it blocked personal WiFi -- far from it. Google, Microsoft and a US carrier lobbying group (the Cellular Telecommunications and Internet Association) are opposing a hotel industry petition asking the FCC to let them block guests' hotspots while they're on the premises. Google and its allies contend that the hospitality business is trying not only to make customers pay for expensive WiFi, but also to effectively take control of unlicensed wireless frequencies. Everyone has "equal rights" to use those airwaves, the carriers say.

Hoteliers are mostly repeating Marriott's arguments. They claim they need blocking to provide a "secure and reliable" connection for guests, and that they're using FCC-approved gear designed to fight interference and intruders. The FCC hasn't yet weighed in on this latest battle, but the hotels may have a tough fight ahead of them given the reasoning that led to the recent settlement. Officials didn't believe that Marriott's security claims held water, and they argued that the company was trying to charge customers for internet access they already had. Unless the federal agency has a change of heart, there's a greater chance that you'll get to use your own hotspot in the future.

In this article: carrier, ctia, FCC, google, hotel, marriott, microsoft, mobilepostcross, networking, wi-fi, wifi, wireless
All products recommended by Engadget are selected by our editorial team, independent of our parent company. Some of our stories include affiliate links. If you buy something through one of these links, we may earn an affiliate commission.