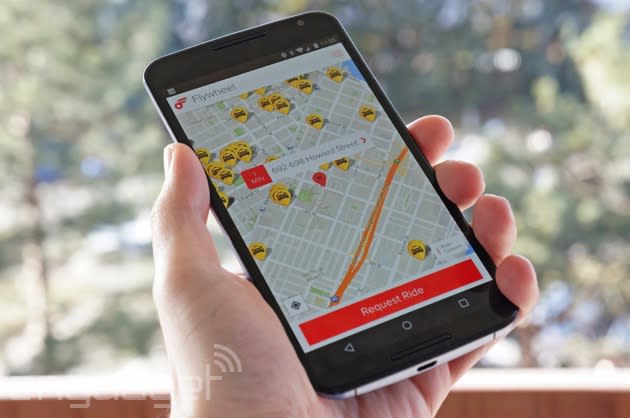 Getting to and from your New Year's shindig can be an expensive hassle, even if you're not driving: you're either competing for a conventional (and thus costly) taxi or bracing yourself for the surge pricing of ridesharing services like Uber. Flywheel may have a relatively cheap solution for that night on the town, though. The app-based taxi service is running a promotion that charges you a flat $10 to get to or from your New Year's party in Sacramento, San Diego, San Francisco or Seattle. The only stipulations for this low fare are that you travel between 8PM and 3AM, and that your ride wouldn't normally cost more than $50. You may not get from one end of the city to the other on the cheap, then, but the deal could save you from starting 2015 with a gigantic credit card bill.

In this article: android, e-hail, flywheel, hail, ios, mobilepostcross, newyear, newyears, NewYearsEve, taxi, transportation
All products recommended by Engadget are selected by our editorial team, independent of our parent company. Some of our stories include affiliate links. If you buy something through one of these links, we may earn an affiliate commission.