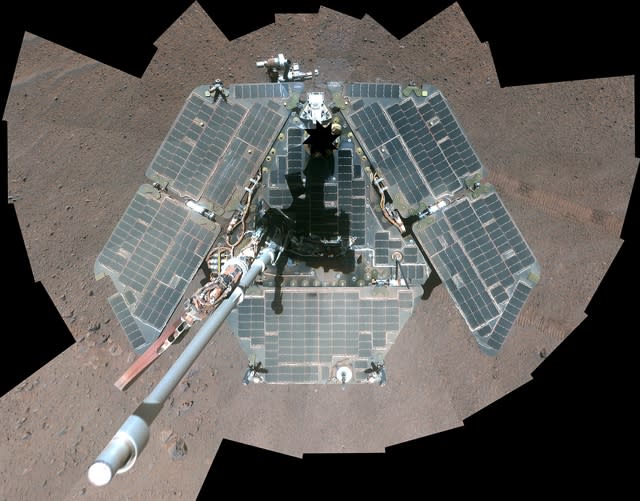 Just like your favorite USB flash drive, the memory on NASA's Opportunity rover is beginning to degrade after more than a decade on Mars. That's led to bouts of "amnesia" where the rover ends up losing data and constantly resets, both of which make any sort of serious scientific work difficult. NASA's already tried reformatting Opportunity to deal with the problem (just like the Spirit rover five years ago), but after a slight communications blackout over Christmas, the agency is now preparing a software update that will prevent the rover from using a specific memory bank entirely. That'll hopefully put a stop to Opportunity's forgetfulness, since it will only be storing data on properly functioning memory, reports Discovery News.

Of course, it's only a matter of time until the rover conks out entirely. But after traveling more than 26 miles on Mars (the most of any rover) since 2004, NASA Project Manager John Callas hopes that Opportunity will survive long enough to reach the so-called Marathon Valley. That area's just 650 meters away from the rover's current spot, and it features geology much older than the Gale crater, where its sibling Curiosity found evidence that Mars once held liquid water on its surface for millions of years. Discovery notes that Marathon Valley is rich with clay minerals, which is a clear sign that plenty of liquid water was in the area. Opportunity has already accomplished more than its original three-month mission called for, but there's a chance its best work has yet to come.

In this article: Mars, NASA, opportunity, Opportunity rover, space
All products recommended by Engadget are selected by our editorial team, independent of our parent company. Some of our stories include affiliate links. If you buy something through one of these links, we may earn an affiliate commission.