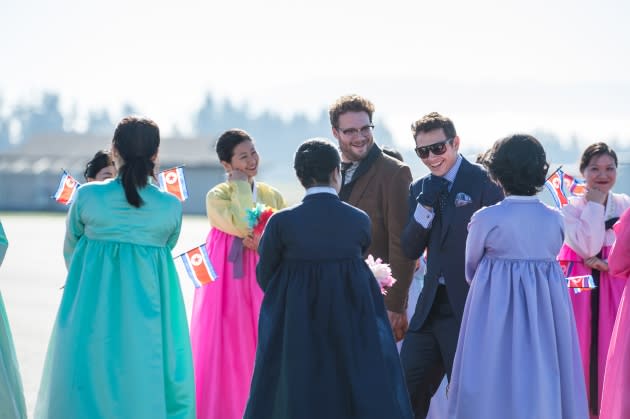 In the space of a few days, Sony Pictures' The Interview has gone from unreleased to impossible to avoid. Cable video on-demand operator inDemand has added the movie to its roster, so for $5.99, pretty much anyone with pay-TV service can rent it right now instead of needing one of Google's video services, Xbox or iTunes. It's also popped up on WalMart's video service Vudu in the past day, is available via DirecTV, and according to Variety, as of Friday the number of theaters where its playing will grow to 580, compared to 331 on Christmas Day. If you're still on the fence about viewing you can use our opinion or that of others, but the movie that couldn't be stopped by North Korea (and/or company insiders) has already reportedly brought Sony $15 million through its unconventional release.

[Culver City, CA, December 31, 2014] – Sony Pictures Entertainment today announced that it has reached agreements with the nation's leading cable, satellite, and telecom providers to distribute The Interview on video-on-demand (VOD) through iN DEMAND affiliates including Bright House Networks, Comcast, Cox Communications, and Time Warner Cable; VUBIQUITY affiliates including Charter Communications, Cablevision, and AT&T U-verse TV; Verizon FiOS; DIRECTV; as well as VUDU, Walmart's digital VOD service. The film will be made available through their VOD and pay-per-view services from $5.99 starting as early as Wednesday and rolling out in different markets through the weekend. Customers of VUDU and Verizon have the option to buy a digital version of the film in addition to the VOD rental. The Interview will also be made available on PlayStation Network starting tomorrow.

"We have always sought the widest possible distribution for The Interview, and want to thank our new partners for helping us make that happen," said Michael Lynton, Chairman and CEO of Sony Entertainment.

The Interview is currently available online through Google Play; YouTube Movies; Microsoft's Xbox Video; iTunes; and, through the dedicated website www.seetheinterview.com. The film opened in a limited theatrical release on Christmas Day. On Friday, January 2, the number of U.S. independent theaters showing the film will increase to over 580.

Breaking news: Cable operators via In Demand and DirecTv now offering The Interview via video-on-demand. Price per play: $5.99.

In this article: cable, directv, hdpostcross, SonyPictures, The Interview, TheInterview, vod, vudu
All products recommended by Engadget are selected by our editorial team, independent of our parent company. Some of our stories include affiliate links. If you buy something through one of these links, we may earn an affiliate commission.