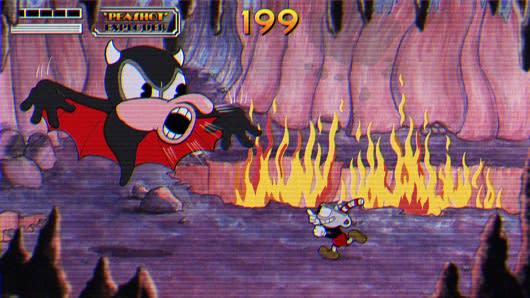 Cuphead is a run-and-gun game with a world that includes branching pathways and bosses, as well as weapons and power-ups. StudioMDHR, which consists of brothers Jared and Chad Moldenhauer, said Cuphead is a "retro game" at its core, "meaning it leans heavier on gameplay and not as much on story." The game's basic premise surrounds our hero Cuphead gambling with the devil, losing, then having to find a way to pay the devil back.

"We wanted to avoid the classic save the world/princess and make the story/theme feel more comparable to 1930s cartoons," Chad told Joystiq. "This is why it is about Cuphead's deep-seated inability to stay out of trouble versus a hero destined to overcome a pre-existing obstacle. Even though he creates his own problems you can't help but root for his success."

While StudioMDHR said the game will be difficult, Cuphead will have infinite lives and won't lose his weapons if he falls in battle, though there will be harder difficulty modes to challenge strong-willed players. Cuphead is confirmed for PC and StudioMDHR said it is "pursuing a console release." The developer shared a few more screens that show some of the game's behind-the-scenes design changes, which we've included in the gallery below. 5
In this article: cartoon, cuphead, disney, Fighting, indie, old-cartoons, pc, run-and-gun, studiomdhr, ub-iwerks, walt-disney
All products recommended by Engadget are selected by our editorial team, independent of our parent company. Some of our stories include affiliate links. If you buy something through one of these links, we may earn an affiliate commission.