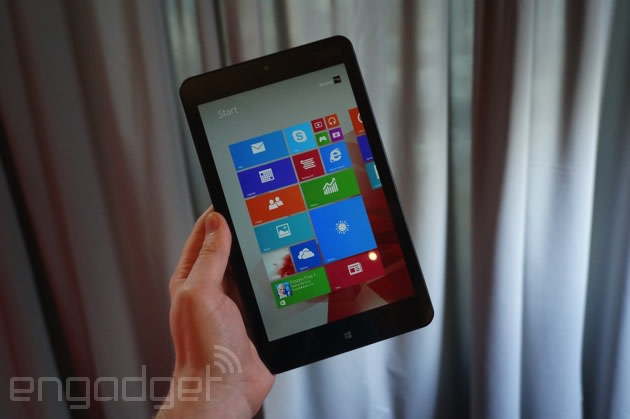 You may have noticed by now, but 8-inch Windows tablets are sort of a thing: Toshiba, Dell and Lenovo each have one, and Acer is already on its second. Until now, they've all been aimed at consumers, with low-end specs and equally low prices to match. Now, though, Lenovo is taking a different tack: The company just announced the ThinkPad 8, an 8-inch business tablet with enough premium features that even regular shoppers might be tempted. For starters, the 8.3-inch screen boasts a resolution of 1,920 x 1,080 1,920 x 1,200, whereas most of its rivals top out at 1,280 x 800. Additionally, it sports an aluminum chassis, micro-HDMI and optional 4G, all of which are fairly rare on 8-inch tablets (or budget tablets, period). Even the camera setup seems slightly better, with 8-megapixel stills and an accompanying flash, not that we ever have high hopes for imaging performance on tablets.

If anything, the only cost-cutting measure seems to be the omission of an active digitizer for pen support, which was included on last year's ThinkPad Tablet 2, and which you can get on Dell's less-expensive Venue 8 Pro. Otherwise, the performance should be on par with other Windows tablets: this packs a quad-core Bay Trail processor (the Intel's Z3770 chip, to be exact), along with 2GB of RAM and up to 128GB of built-in storage. And with a rated battery life of eight hours, its runtime should also be similar to other 8-inch tablets. If that high-res screen does anything for you, the ThinkPad 8 will be available later this month, with prices starting at $399 (that's without the 4G, of course). We've just handled the new ThinkPad, and we've got a few impressions to share just after the break.

Putting a 1080p display into an 8-inch tablet makes an awful lot of sense: it's already in plenty of flagship smartphones half the size. It's also a functional resolution, perfect for movie playback. The screen was thankfully bright with wide viewing angles, making it a clear improvement over other small Windows tablets. Those higher quality build materials also mean an all-around classier design too: we were particularly taken with the ThinkPad styling (including the same old light-up dot on the 'i" in the ThinkPad logo). Sure, fingerprints are visible on the tablet's satin finish, but Lenovo's prior tablets weren't nearly as slick -- in fact, we'd go so far as to say that this feels as premium as the company's flagship Ultrabooks.

As for performance, the Intel Bay Trail chip powering it all proved more than capable during our play time, and we saw it stream video to connected monitors without issue. It's a tempting little Windows 8 tablet (more than we thought it'd be, anyhow) and we can't wait to see how it fares in a full review.

In this article: ces, ces2014, hands-on, lenovo, lenovothinkpad8, thinkpad8
All products recommended by Engadget are selected by our editorial team, independent of our parent company. Some of our stories include affiliate links. If you buy something through one of these links, we may earn an affiliate commission.