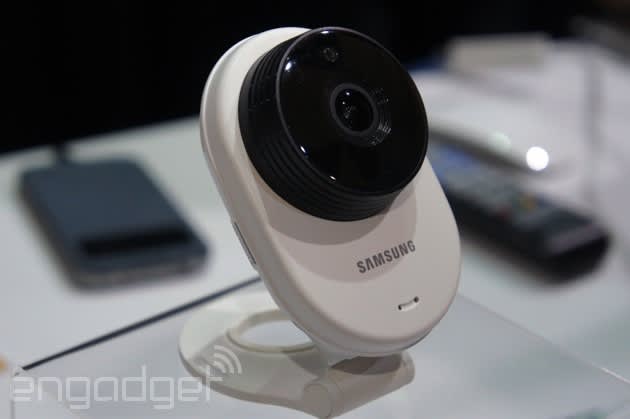 Just in case the NSA isn't keeping a close enough watch over everything, you can use Samsung Techwin's latest SmartCams (previously seen in 2012 and 2013) to do your own surveillance. The SmartCam separates from its competitors by recording 1080p video to an internal SD card, and has a version designed to work outside. That means that unlike Dropcam, for example, it's not constantly uploading video to a remote server for storage and doesn't require an add-on subscription to work. While that cuts out some of the cloud-based security Dropcam can offer, it combines with Samsung's compression tech to enable these to use about 30 percent of the bandwidth other cameras require, and still lets owners tap in remotely for a peek whenever they like.

Both connect over WiFi, and can be configured from Android or iOS devices using the SmartCam app and WiFi Direct. Both claim excellent low-light video quality, and while the indoor version has a range of about 16 feet, the outdoor version extends to 50 feet. Beyond its extra viewing range, the outdoor version is ruggedized for the elements, and comes in two parts, keeping the power and WiFi module securely inside your home, connected to the camera outside via a network cable. The SmartCam HD and SmartCam HD Outdoor should hit shelves around March for $179 and $229, respectively. In this article: hands-on, IpCamera, outdoor, samsung, security, smartcam, smartcam HD, smartcamhd, wifi
All products recommended by Engadget are selected by our editorial team, independent of our parent company. Some of our stories include affiliate links. If you buy something through one of these links, we may earn an affiliate commission.