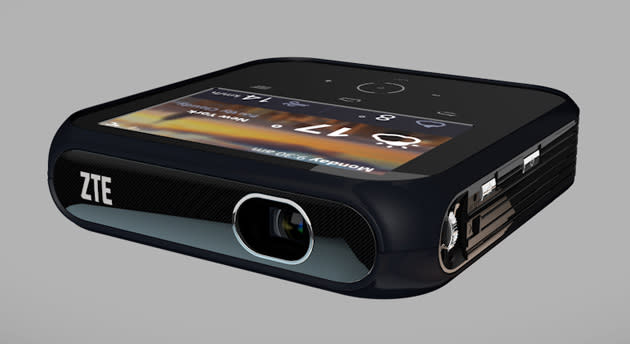 We've seen some pretty clever hotspots in our day, but ZTE is determined to trump them all with its new Projector Hotspot. As the name implies, it's both a 1080p DLP projector (with HDMI and WiFi Display support) as well as an 8-device LTE hotspot, giving your mobile devices a big screen and internet access at the same time. However, it's smart enough that you sometimes won't need another device at all. This hotspot runs Android 4.2, folks -- you can hop online through its 4-inch touchscreen and project content from any app or website. ZTE plans to bring the Projector Hotspot to the US sometime in 2014, although it isn't yet saying which carriers (if any) are involved with the launch.

In this article: android, ces2014, dlp, hotspot, jellybean, lte, mobilepostcross, networking, projector, projectorhotspot, wi-fidisplay, wifidisplay, wireless, zte
All products recommended by Engadget are selected by our editorial team, independent of our parent company. Some of our stories include affiliate links. If you buy something through one of these links, we may earn an affiliate commission.