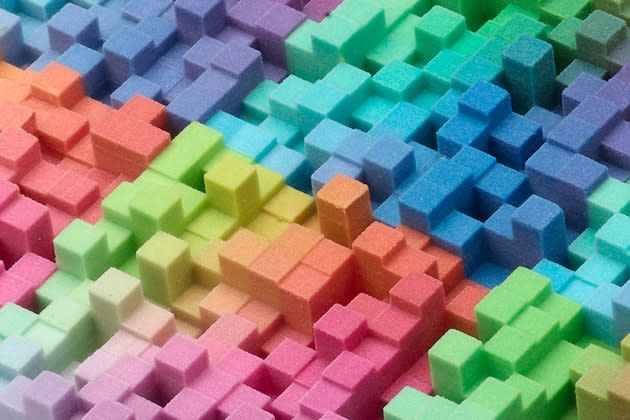 Like you, we've dreamt about owning one of those industrial rapid prototyping machines since the first time we saw one in action. Of course, certain financial and real estate realities have made such fantasies a resolute impossibility for our modest New York City apartment. Priced at "under $5,000," the CubeJet will likely still be too rich for our blood by the time it launches in the second half of this year, but compared to the $100,000+ plus machines out there, things are certainly heading in the right direction. Ditto for the size - in fact, this pretty would look pretty sweet sitting on our office desk at home.

Thus far, 3D Systems' consumer-facing machines have relied on the extrusion technology that you find in most printers in that class. This time out, however, the company is tapping into its industrial roots, for a desktop system that is capable of creating full-color, high resolution prints. This being a consumer device, the company's also focused on offering up a relatively user-friendly interface, though that remains to be seen until we actually get our hands on the printer on the CES floor. We'll also be joined by the company's CEO Avi Reichental on our CES stage later today, who will no doubt shed more light on the CubeJet, along with the company's other announcements.

It's easy to see where such a device could ultimately fall on the spectrum, no doubt appealing to small businesses with a need for rapid prototyping and really devoted makers with a lot of disposable income. Perhaps "prosumer" is a bit more apt in this case?

In this article: 3d printer, 3d printing, 3dsystems, ces2014, cubejet
All products recommended by Engadget are selected by our editorial team, independent of our parent company. Some of our stories include affiliate links. If you buy something through one of these links, we may earn an affiliate commission.