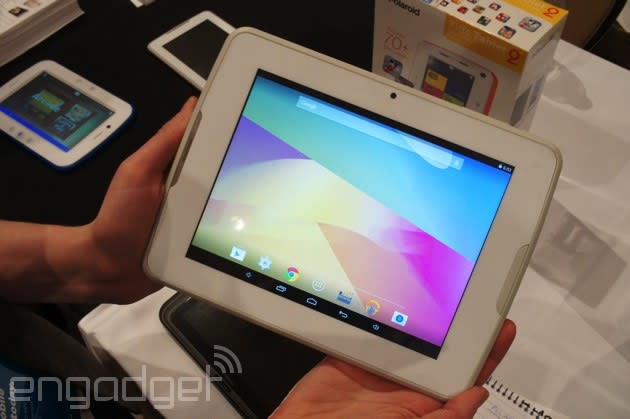 Polaroid's not just about cameras. In fact, the company typically debuts a new tablet or two at CES. This year's no different: tonight we got a look at its latest cheapo, the Q Series slate. The Q7 goes for $129, but we got our hands on the 8-inch version, which will set you back $149.

As far as specs go, the only outright positives here are the quad-core processor under the hood and the fact that the Q8's running Android 4.4 KitKat. Navigating home screens and apps on the screen was snappy and lag-free, even though the unnamed CPU is likely on the low end of available quad-core chips.

Speaking of the screen: pixel density is appallingly low here, which is to be expected with such a budget-priced tablet, but nonetheless underwhelming -- especially when the Nexus 7 exists. The Q8 is done up in a soft-touch finish, which looks and feels anything but premium. Especially with the white model, we can imagine you'll pick up smudges quite quickly. Rounding out the spec list are 8GB of internal memory are on board, along with 1 gig of RAM, and both front and rear cameras. That's about it -- it's been a tradition to hit Polaroid slates at CES, so take a look at the photos below for our hands-on treatment.

In this article: CES, ces2014, polaroid, polaroid q series, Polaroid Q8
All products recommended by Engadget are selected by our editorial team, independent of our parent company. Some of our stories include affiliate links. If you buy something through one of these links, we may earn an affiliate commission.