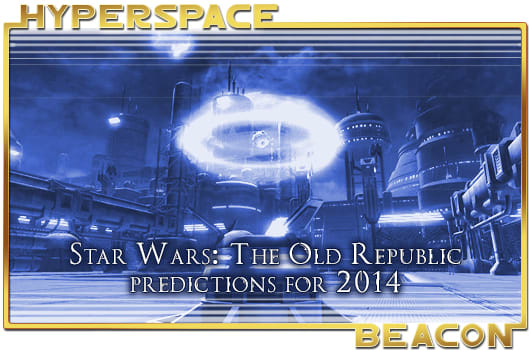 Knowing my luck, when I finish writing this, the marketing team for Star Wars: The Old Republic will release a huge announcement about 2014 that no one saw coming. And it wouldn't be hard for BioWare to release something unknown to the community at large because it's said next to zero about what we should expect for 2014. Normally, BioWare promotes the upcoming features to death. We knew about the Cathar coming at least a year before they actually hit the live servers. Players and fans (and enemies) of SWTOR have speculated wildly as to why the developers have remained silent on the subject, my favorite being that BioWare has run out of content to produce, which kind of reneges on the 10-year plan it touted before launch.

Whether or not BioWare has new content in the works, we do know a few things that will be coming, and we also have some super-secret things we can speculate on thanks to some intrepid SWTOR fans. So let's talk about what we do know, what we don't know, and what we think will happen.

Fans of SWTOR PvP, how many times have you heard it said that Huttball would be so much better if it had different maps? My PvPer friends, and even the PvP dabblers, have been longing for a new map to Huttball for a long time. Conceptually, I enjoy the game. In fact, if I recall correctly, I called it extremely inventive: taking the basic idea of capture the flag and allowing the players to toss the flag to each other.

However, as with any capture-the-flag game, the team that knows the map the best is likely going to win, especially if the other team has never seen the map before. Even though I have a great guild, I do PvP solo a lot, and I groan every time I land Huttball in a PUG. The map's not really new to anyone anymore, but if the other team is a pre-made group, its coordination will always outperform a PUG's. 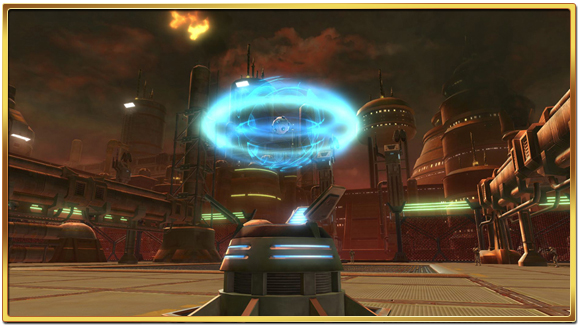 Four months ago (yes, it's really been that long), BioWare teased an image of a Huttball sitting in the middle of a brand-new map on what looks to be Quesh. This little image, of course, became a whet for PvPers, but it also sparked speculation for the forthcoming PvP update. Yet the PvP update came and went, and we saw no new Huttball map. So what happened?

I believe this little project became sidetracked by the super-secret space project that eventually became Galactic Starfighter. However, I don't believe BioWare has forgotten about this new map. My hope is that we will see this new map and possibly other PvP 8v8 maps hitting the servers in the next couple of months.

As Community Manager Eric Musco teased last week, we will see the official launch of Galactic Starfighter hit with update 2.6. Along with that, players will gain access to a new gunship and a new class of fighters: the bomber. In testing, the bombers were so overpowered that BioWare pulled them from the soft launch of GSF. Hopefully, the upcoming testing for the official launch will work out all the bugs.

Right now, GSF seems to be the major focus for the SWTOR team, and rightly so. Even on my primary server, an RP-PvE server, the queue times for GSF are extremely short. Players seem to really be into this new form of PvP. I enjoy it, but it's not exactly my focus. I'll queue up to do my daily and weekly missions, but beyond that, I let my other guildies tell me what's happening in the stars. They do say that the balance in ships appears to be fairly spot on. Strike-fighters need a bit of a boost, but scouts and gunships own the skies.

I am hoping that we see new types of maps really soon. I don't think the two domination maps are bad, but when it come down to it for me, I seem to be doing the same stuff over and over. It gets too repetitive for me to play it beyond one or two matches. I believe that by this summer, we will see at least two new maps for GSF and one new battle type -- maybe deathmatch. 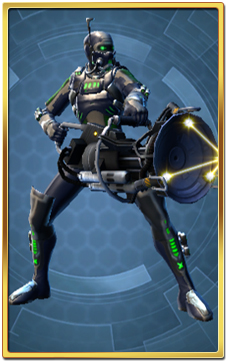 It's not a secret that the Rakghoul event is coming back, but we don't exactly know how or why. The details are sketchy, but given the amount of hype surrounding the event, I think it will likely be bigger or at least better than the last event where many people would stand around fleet exploding green gunk all over each other.

If you watch the collections UI, then you'll notice THORN (The Hyland Organization for Rakghoul Neutralization) armor and the new THORN reputation. According to the patch notes, this reputation is "a GSI-affiliate dedicated to studying and eradicating all traces of the Rakghoul plague from the galaxy." Then it continues by saying, "THORN should be unnecessary as the Rakghoul outbreak was clearly eliminated from the galaxy." Yeah, right. Look for a new event in about a month or two.

I'm just going to touch on this because I don't want to get people's hopes too high. A player on Reddit likes to dive deep into the datafiles for SWTOR's test center. In those encrypted files, he found multiple placeholders for a housing vendor. With the popularity of player housing in games like RIFT and the upcoming WildStar and EverQuest Landmark, maybe BioWare is feeling the crunch to add something similar to its game. I certainly hope so. Maybe, just maybe, that is why the studio has kept so quiet about what's coming in 2014. If not, maybe we can Jedi mind trick it into doing housing anyway.

Those are my predictions for 2014. What have you seen or heard that might make you think something else is happening? Do you have any hopes or dreams for SWTOR in the coming year? Let me know what they are in the comments.

The Hyperspace Beacon by Larry Everett is your weekly guide to the vast galaxy of Star Wars: The Old Republic, currently in production by BioWare. If you have comments or suggestions for the column, send a transmission to larry@massively.com. Now strap yourself in, kid -- we gotta make the jump to hyperspace!
In this article: 2014, 2014-predictions, bioware, ea, electronic-arts, eric-musco, f2p, featured, free-to-play, galactic-starfighter, gsf, housing, huttball, hyperspace-beacon, lucasarts, new-huttball-map, opinion, Predictions, PvP, quesh-huttball, rakghoul, rakghoul-plague, reputation, sci-fi, star-wars, star-wars-the-old-republic, swtor, the-old-republic, THORN, tor
All products recommended by Engadget are selected by our editorial team, independent of our parent company. Some of our stories include affiliate links. If you buy something through one of these links, we may earn an affiliate commission.